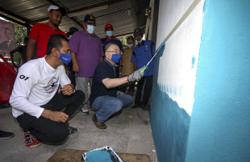 Umi (right) showing her home-made crisps to Dr Wee when he visited her house to present smartphones, essential items and cooking equipment to her.

A SINGLE mother of seven has been struggling to make ends meet ever since she lost her job as a cook at a religious school in Ayer Hitam last year.

Umi Naza Osman, 36, said life was tough as she was raising her children, aged four to 17, on her own since her divorce three years ago.

To supplement her income, Umi sold burgers from a stall in front of her house in Kampung Rahmat, Ayer Hitam.

“When I was let go from my job during the previous movement control order in March last year, I lost my main source of income.

“I began selling home-made banana, vegetable and potato crisps but I could only make small batches with my limited cooking equipment, ” she said when met at her home.

Umi was thankful that Transport Minister and Ayer Hitam MP Datuk Seri Dr Wee Ka Siong took the time to listen to her plight and presented her with a four-legged high-pressure stove and a large wok.

“With my new equipment, I can produce more crisps and supply them to more places, ” she said, adding that she promoted her items through social media.

Dr Wee, who presented the family with essential items such as rice, cooking oil, sugar, flour and mandarin oranges, said the family also received two smartphones to help the children with their online classes.

“Due to financial difficulties, all seven children are sharing their mother’s smartphone for their online classes during the MCO.

“We decided to help them as the eldest 17-year-old son needs to study hard for his Sijil Pelajaran Malaysia examination this year, ” he said.

Dr Wee said despite the MCO, his team of volunteers was continuously identifying the needy and helping them.

His service centre worked with Yong Peng Lions Club to distribute 360 packs of essential items to needy families as well as handed out financial aid to 65 kidney patients on dialysis and those suffering from other chronic diseases.

“Overall, the Ayer Hitam MP service centre has distributed about 17,000 packs of essential items, including biscuits, eggs, vegetables, fruits and cooking items to B40 families in my constituency to help them since the first MCO began on March 18, last year, ” he added. 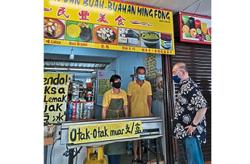