The blind, especially those working as buskers and masseurs, are out of work. Many now depend on cooked meals provided by MAB and distributed by volunteers. — Filepic

THE economic implications of the movement control order to contain the spread of Covid-19 have hit many communities hard, especially those in the lower-income group.

The blind community is no exception.

Their plight is made even more desperate as a number of them are musicians and masseurs who work in clubs or pubs and massage parlours.

Unlike most sectors that have been allowed to reopen during the MCO, these two industries are still on the National Security Council’s banned list. In short, blind musicians and masseurs have been left destitute.

Many now rely on donation of cooked meals and non-perishable food to survive.

Simon Woon, 69, who has been blind since he was a child, rents a room in an old flat at Jalan Sultan Abdul Samad.

He has been making a living as a full-time busker ever since he came to Kuala Lumpur from Ipoh some five years ago.

But he has been out of work since March 18 last year because of the MCO.

The monthly welfare aid of RM500, which he receives under the senior citizen category, goes towards his rent.

“I used to make about RM500 from busking and with my welfare aid, I could live a simple life.

“When I perform at corporate events, I get paid a little more.

“I have not performed close to a year. I can sing and play the guitar, ” said Woon, a bachelor.

Before the MCO, he performed with his peers in Petaling Street, Kuala Lumpur and outside Jaya Shopping Centre in Petaling Jaya.

Singing requires him to remove his face mask in public, so it is not possible to perform during these challenging times.

This has hampered his earnings. Woon, a full-time busker since moving to Kuala Lumpur from Ipoh, has been unable to work since March last year.

“My friends and I have depleted our savings.

“It is very depressing to hear that Covid-19 cases are on the rise because we know that we cannot go out to work anytime soon.

“Most of us have little to almost nothing left, ” said Woon.

He added that some of his blind peers, who sold tissues packets from table to table at restaurants as well as by the roadside, were suffering from no income too.

Anna Loo, 50, worked as a telephone receptionist at a bank for 10 years.

She invested the money she received from a voluntary separation scheme and opened a massage centre some 20 years ago in Jalan Padang Belia in Brickfields.

She then hired several of her blind peers to work at the centre.

However, since the MCO, Loo has been facing difficulties, especially with the monthly RM1,700 rent for the premises.

“Last year, when the MCO was announced, my landlord gave a 50% discount for April and May. This was followed by a 25% discount in June.

“Business was not as usual as customers were a little apprehensive even though we were following the standard operating procedures.

“Just when we thought we could start earning again, the second MCO was implemented. It has been tough, ” said Loo, who is married with two children.

She added that a number of her blind peers had given up their businesses entirely as they did not have the holding power.

Meanwhile, after months of being on unpaid leave, Muhamad Firdaus Mohd Said, 28, has just returned to work at a five-star hotel in Kuala Lumpur.

The hotel had asked him to go on unpaid leave for most of 2020. Firdaus has just returned to work at a five-star hotel in Kuala Lumpur, after being on unpaid leave for most of 2020.

He works in the hotel’s laundry department and operates the laundry’s computer systems.

Firdaus has just started receiving RM400, which is the welfare allowance for the disabled.

The bachelor said his rent for a flat in Setapak was RM300 and he had used up his savings.

He worries that he too may run out of money soon if his job remains uncertain.

“But I’m honestly glad to still be employed at this moment.

“I am trying to stay optimistic. I believe that the hotel sector will be prosperous once cross-border travel is allowed, ” he said.

Malaysian Association for the Blind (MAB) chief executive officer George Thomas hopes the government can provide some form of rental assistance to those with disabilities, especially the ones living in urban areas.

He hopes the disabled will also be assisted in terms of attaining microcredits to help them kick-start their business.

“Survival is a challenge for the disabled, especially the blind, who are renting rooms in urban areas such as Brickfields.

“Many have lost their jobs in recent months and a number of them have returned to their hometowns.

“We came to know that a majority of them were finding it difficult to obtain any form of government grants or microcredit.

“We know such assistance is available, ” he said, adding that the process must be simple and dedicated officers could assist them in obtaining these grants.

“The blind complain that a lot of excuses were given when they apply for these grants instead of making the process easy for them, ” George pointed out.

The blind also hired other blind people at massage centres, so it was crucial to reopen spa and massage parlours as their livelihoods were severely affected, he noted.

Under the National Eye Survey, it is estimated that there are 700,000 visually impaired persons in the country.

Some 51,000 are registered with the Social Welfare Department.

George said during the first MCO in March last year, some 2,150 blind families in Peninsular Malaysia received food baskets from MAB that was funded through donations from the public.

The baskets consisted of items such as rice, canned sardine and face masks.

Since January, about 100 cooked food packs have been distributed daily in Brickfields and several low-cost flats in the surrounding area, while over 1,000 food baskets have been given to the blind in the peninsula since MCO 2.0 was implemented.

“The process is more organised now and we have even roped in disabled and sighted volunteers, such as teachers who teach the blind to distribute the food aid, ” he said. George hopes to raise about RM400,000 to provide food baskets and assistance to at least 3,000 blind people.

He added that the blind living in rented rooms also faced difficulties in cooking their meals, hence the daily distribution of cooked food.

Geoge said there had been efforts to restart training for blind students but it was put on hold as such activities were currently not allowed.

“All our training rooms are empty.

“It is a disheartening sight as the MAB building used to be a busy activity centre for the blind to learn skills such as massage and basket weaving, ” he said.

MAB hopes to raise about RM400,000 to provide food baskets and assistance to at least 3,000 blind individuals.

Email the transaction slip to mablind@mab.org.my with your name, address and contact number for the issuance of a receipt. The blind, especially those working as buskers and masseurs, are out of work. Many now depend on cooked meals provided by MAB and distributed by volunteers. — Filepic

Many from the blind community receive their training in massage and basket weaving at MAB. However, all forms of training have been put on hold due to the MCO. — LOW LAY PHON/The Star

Loo (right) and her peers who are blind enjoy singing at corporate events but the pandemic has crippled the entertainment industry. — Filepic

Loo hires several of her blind peers to work at the centre. However, since the MCO, she has been facing difficulties, especially with the monthly RM1,700 rent for the premises. — RAJA FAISAL HISHAN/ The Star 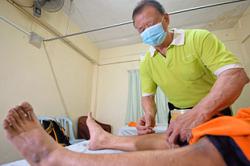