Voon says the council received 58 complaints last year with a total of RM313,028 in losses.

SELANGOR Consumer Action Council (MTPN) recorded 58 complaints from consumers who suffered a total of RM313,028 in losses, in a nine-month period last year.

Its president Datuk Dr Gavin Voon Shih Chin, said 51 of the complaints had been settled through negotiations between the parties, while seven remaining ones were still being investigated.

From the seven, he said, one involved a fatality due to a cosmetic treatment.

“The brother of the victim has filed a complaint with us and we have advised him to lodge a police report on the matter.

“We have also forwarded the case to Health Ministry for follow-up action.

“In another case involving plastic surgery, our panel lawyer managed to negotiate a sum as compensation to the claimant, ” he said.

Voon said Selangor MTPN received an average of three complaints a day but many were incomplete.

“Many complainants, especially those who file their cases with us online, do not give full details for us to investigate.

“And the complainants often want to remain anonymous, which makes our task very difficult.

“We need solid proof of wrongdoing before we act, ” he explained. 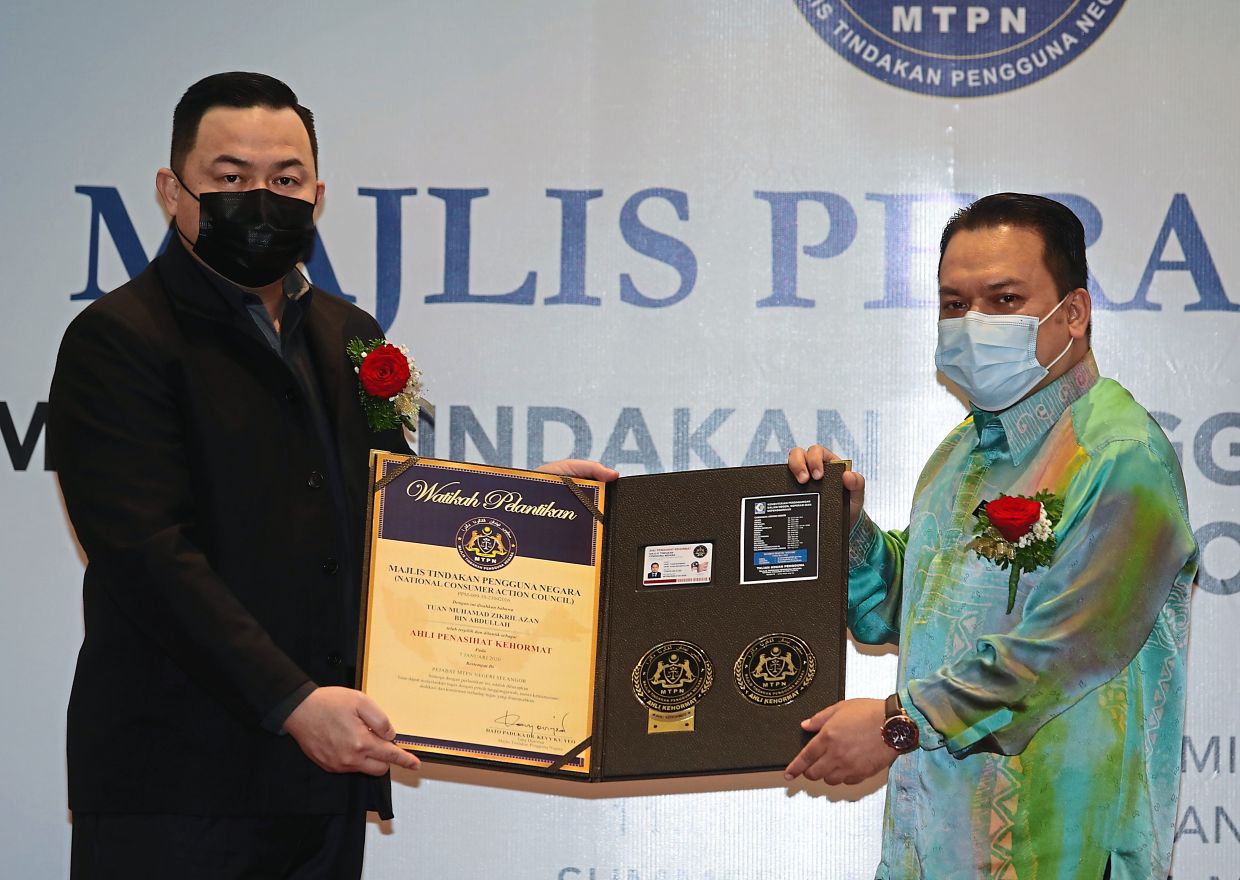 Yeo (left) presenting to Zikril a certificate to mark the latter’s appointment as Selangor MTPN adviser.

He said the council was trying to establish a comprehensive e-complaint system to make the process convenient.

“The system will be linked to various government agencies, among which are the police, Domestic Trade and Consumer Affairs Ministry (KPDNHEP), Tribunal for Consumer Claims Malaysia (TTPM) and Health Ministry, for easy reference and coordination, ” he elaborated.

The council was set up as a non-governmental organisation by its president Datuk Dr Kevy KV Yeo in March 2020.

Voon said the objective of the action council was to manage consumer complaints and improve awareness among traders and business proprietors on laws and ethical business.

“We want to form a group of councillors, comprising academicians and professionals, to study and analyse the regulations, principles, guidelines, policy and laws related to consumer wellbeing, especially consumer protection.

“We also want to foster better relationships and cooperation between government agencies and non-governmental organisations, through activities and community programmes such as discussions, dialogues and seminars, ” he said.

He said it would help traders and business owners to rectify the situations that caused the complaints against them.

“We have done similar initiatives before but this time, we will have a more targeted approach.

“We will be engaging with wet markets, supermarkets and grocery shop associations.

“Hopefully we will not only reduce the number of complaints but also create more awareness among the traders on good business practices, ” said Zikril, who has also been appointed as Selangor MTPN adviser.

The remaining complaints, he added, were about controlled items and online transactions.