THE Environment and Water Ministry has yet to receive a formal application from a battery factory to operate near Kampung Jenjarom in Banting, Selangor.

He said this during a town hall session with Kampung Jenjarom villagers who were concerned about the factory being allowed to operate again after a pollution incident in 2019.

“I was informed that the factory was not planning to make batteries from scratch and that they were only going to assemble components.

“Their water usage could also be much lower compared to the previous owner, ” he said.

Tuan Ibrahim had earlier attended a briefing at the factory about its proposed operations but StarMetro was barred from attending.

StarMetro had reported on Jan 5 that the previous battery factory was ordered to close in 2019 by the Selangor government after the factory was found responsible for lead pollution in the area.

The plant had since been bought by another company looking to make solar batteries at the same site.

Villagers objected to the proposed plan as they said the area was considered a medium industry zone.

Selangor DOE director Nor Aziah Jaafar said the factory must not release harmful substances into the air and surrounding water bodies.

She said the department’s attendance at the briefing did not mean that the factory would receive the go-ahead to operate.

Masjid Jenjarom administrator Rafiee Hashim said villagers were uneasy about having such an industry in close proximity to their houses.

Responding to these concerns, Tuan Ibrahim proposed for dialogues to be held between the factory owner and villagers.

Sijangkang assemblyman Datuk Dr Ahmad Yunus Hairi, who was present at the town hall, volunteered to facilitate the meetings. 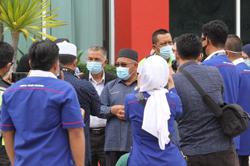