Mohd Iqmal showing his handphone with an image of him rescuing the woman. With him are his squadmates who also took part in the rescue operation. — Photo: ZHAFARAN NASIB/The Star

But after lowering himself into the water, he could not see her because of the waves.

“When I was in the water, the sea was choppy and I temporarily lost sight of her.

“But with my colleagues’ help, I managed to zoom in on her position.

“I had to swim about 500m before I could reach her. Then I tried to calm the victim before giving her a lifebuoy, ” said Mohd Iqmal.

Recalling the incident on Dec 6, Mohd Iqmal said he and his partner Faizal Ammar, 33, were resting in their cabin when they received an emergency call from the operation centre at about 7am.

“We were about to finish our shift when we were alerted about the incident.

“When we arrived at Km16.8 on the east-bound bridge, we saw a car parked on the emergency lane with no sign of the driver.

“We then crossed to the other side of the bridge and saw the woman in the water.

“She had already drifted about 100m from where she was believed to have fallen, ” he said when met at the JKSB office in Batu Kawan recently.

Mohd Iqmal, who received his training at the Fire and Rescue Department Academy in Kuala Kubu Baru, said two other colleagues – S. Ramesh, 50, and Mohamad Nor Afandi Mohamad Shariff, 55, – later joined them in the rescue operation.

“Although I have no experience in this situation, I did not hesitate to respond immediately.

“Armed with a life jacket, buoy and ropes, I lowered myself into the water.

The 22-year-old woman was then lifted to a Malaysian Maritime Enforcement Agency (MMEA) boat and brought to shore.

The whole rescue operation eventually ended at 8.45am. Mohd Iqmal showing his handphone with an image of him rescuing the woman. With him are his squadmates who also took part in the rescue operation. — Photo: ZHAFARAN NASIB/The Star

Mohd Iqmal preparing to descend from the bridge. —Photo courtesy of JKSB

The woman being rescued by Mohd Iqmal (in the water) and MMEA personnel after falling from the Sultan Abdul Halim Mu’adzam Shah Bridge. — Photo courtesy of Fire and Rescue Department 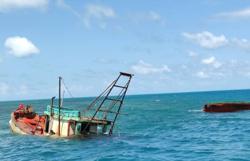