THE magical Christmas decorations at shopping malls around Penang will help brighten the spirits after a hugely challenging 2020.

While not as elaborate as previous years due to current restrictions, they ensure that the year-end still has that familiar atmosphere of joy and festivity.

Shoppers, despite faces being hidden by face masks, wasted no time snapping photos with the backdrops once they popped up at the start of the month.

There are facades of cheerfully-decorated homes, pubs, restaurants and boutiques reminiscent of those lining Portobello Road in Notting Hill district of West London, which is part of the Royal Borough of Kensington and Chelsea.

Completing the scene at the central atrium is a giant 12.2m-tall (40ft) Christmas tree. Catch daily light mapping shows between 6pm and 9pm until Jan 3.

Gurney Plaza centre manager Peter Chan acknowledges that Christmas will feel a bit different this year, but the spirit of love, joy and giving remains.

“Each year, we strive to outdo ourselves by creating experiential festivities for shoppers. We know that many are unable to travel abroad for now and decided to bring a London-inspired Christmas to Penang instead.

“As the safety and wellbeing of everyone remains our top priority, all precautionary measures in compliance with government guidelines are in effect, ” he said.

Gurney Paragon Mall celebrates a charitable ‘Season of Giving’ with adorable bird houses at the atrium.

Watched over by little squirrels, shoppers are rewarded with mystery gifts every time they make a donation. All proceeds will benefit the Children’s Protection Society.

The rest of the mall is also decked out with traditional garlands, baubles and trees.

“Though we’re adapting to the new normal, it doesn’t mean this Christmas can’t be a merry one.

A festive atmosphere will help lighten everyone’s mood after a difficult year due to the pandemic.

“Through this CSR initiative, we want to give back to the less fortunate and keep the spirit of the season alive, ” explained marketing communications head Jasmine Tai.

At Straits Quay, visitors get to enjoy A Winter Adventure in the balmy tropics. A 9.1m (30ft) tree glistens with silver and gold ornaments, while a jolly snowman stands poised for selfie hunters.

Besides these decorations and a life-sized board game at the open-air Straits Court, other parts of the seaside mall are also dressed up with lights, garlands and snowflakes.

Tan said simply snap a ‘holiday moment’ with the backdrop, add the hashtags #StraitsQuay and #SQWinterAdventure and upload to your social media accounts to be in the running for prizes.

Despite the lack of foreign travellers due to closed international borders, hotels have also decorated their spaces to heighten the atmosphere for local guests.

Notably, for the first time in 17 years, its lighting up was done virtually.

Instead of the usual ceremonial gathering, guests instead viewed general manager Alison Fraser bringing it to life via Facebook and Instagram live.

In Kedah, Aman Central’s Christmas theme, ‘A Magical Noel Tree’, revolves around a giant 15.2m-tall (50ft) conifer tree which is said to be the tallest indoor Christmas tree in the northern region.

Bringing lush fantasy to the centre court, it is bedecked with colourful giant flowers, mystical butterflies, glittering ornaments and lots of fairy lights.

The mall is also running a snap-and-win contest on its Instagram account, so capture the magical scene and you can win prizes.

Its senior marketing communications manager Ken Chin said: “Despite a challenging year, we hope to give everyone a joyous festive season by bringing some Christmas magic to life.

“Besides spreading cheer, we also want to help our tenants and get Kedah’s state economy moving once again. Let’s overcome this and enjoy a season of giving.” 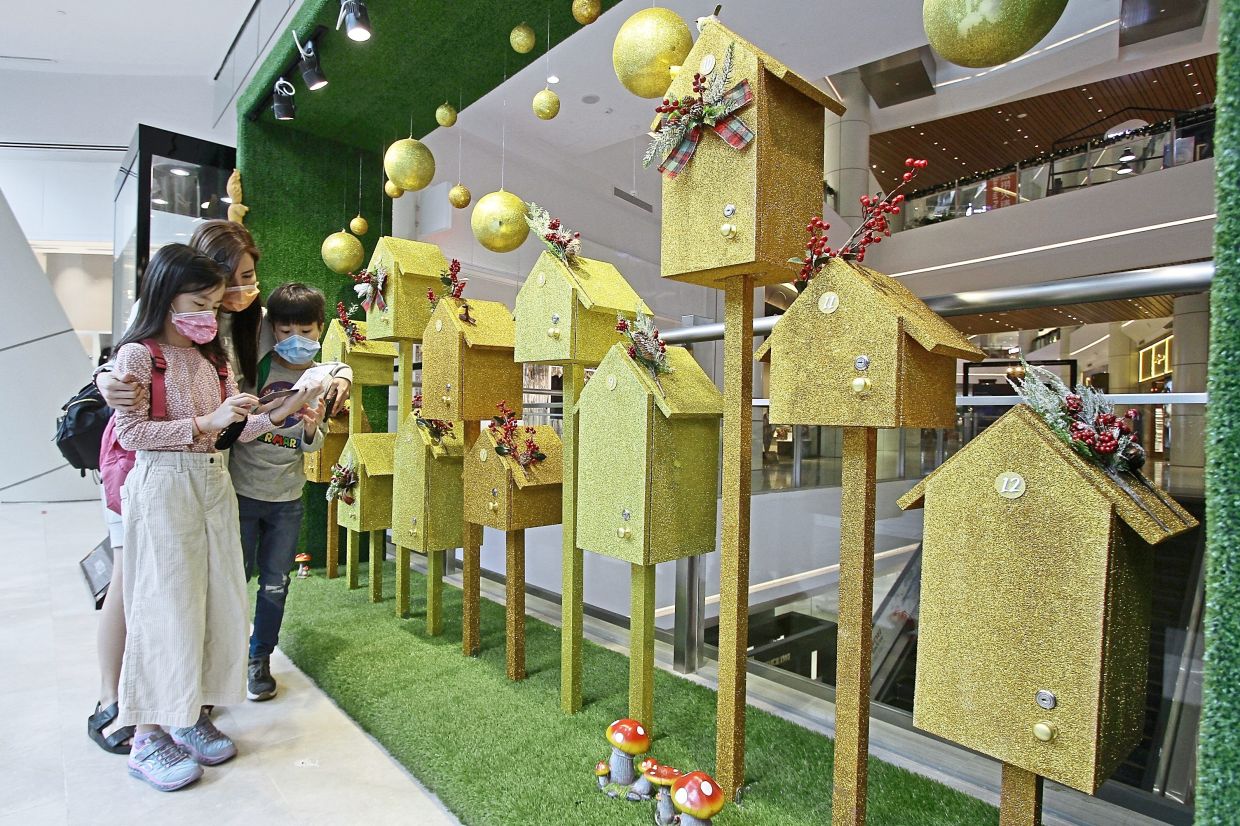 Staff of E&O Hotel touching up the decorations and selection of Christmas goodies at a giant gingerbread house.

A family checking out the bird houses at Gurney Paragon Mall for its Season of Giving charity drive in aid of The Children’s Protection Society.