MPKL's enforcement team cleared up an illegal dumpsite at Sijangkang Utama in Telok Panglima Garang in July. The problem of illegal dumping has plagued the municipality for years, according to environmental activists.

MANUFACTURERS and factory owners in Kuala Langat must appoint KDEB Waste Management (KDEBWM) to manage the disposal of their solid and bulk wastes in order to renew their business licences for 2021.

In a circular to factories to abide by proper and prescribed procedures for waste disposal, Kuala Langat Municipal Council (MPKL) has made clear that renewal applications must come with copies of appointment letters to KDEBWM and receipts for waste disposal services.

Non-compliance will result in licence suspension.

The move is part of the council’s efforts to combat indiscriminate dumping and environmental pollution in Kuala Langat.

The circular from MPKL, which was released in July, also stated that while KDEBWM would continue to oversee the handling of solid waste such as food and bulk wastes for the domestic and commercial sectors, factories and manufacturers producing rubbish falling under the scheduled waste category must refer to the Environment Department’s (DOE) website for a list of licensed transporters and waste facilities. In Selangor, there are 147 companies listed in that website.

Also listed are 77 types of waste that need specialised treatment.

They range from lead batteries in whole or crushed form and electrical and electronic assemblies that contain heavy metals, to waste that contains chemicals.

Kuala Langat Environmental Action Organisation (PTASKL) chairman Tan Ching Heng told StarMetro this was a positive step by the council to address the illegal dumping issue which had plagued the municipality for years.

Tan, who also owns a health products factory in Taman Yayasan which is a light industrial area in Jenjarom, said many factory owners here had been dragging their feet regarding contracting proper waste disposal companies to manage their rubbish because they were not willing to pay the necessary fees for this service.

“They will only take action after their rubbish has grown into an unsightly pile.

“They will either try to burn these piles of waste and pollute the air with black smoke or they hire lorries to have them removed.

“These types of service providers do not usually dump rubbish at approved landfills or transport them to proper recycling facilities.

“Instead, it is dumped in lakes, secluded jungle or vacant lands, ” he noted. 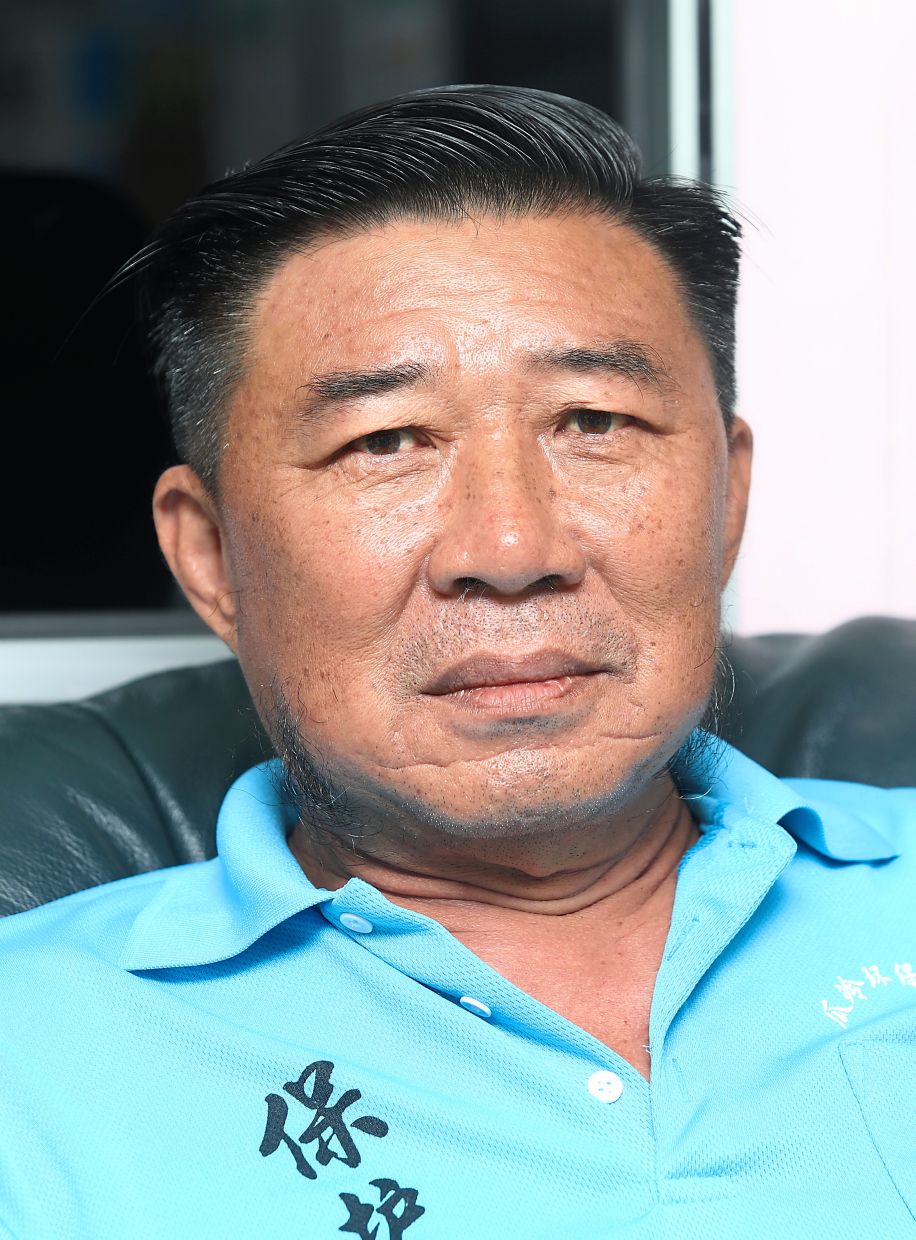 Illegal factories, those in the light-medium categories and outfits run by foreign nationals were the most likely culprits for hiring fly-tippers or illegal dumpers, he added.

Tan said acute illegal dumping could be seen at the Sungai Manggis area in Banting where there were many plots of vacant land.

“Either the owners have permitted the fly-tippers to dump their rubbish on their land or it is being done without their knowledge.

“Some owners told me that they allowed fly-tippers to use their land as a rubbish dumpsite on condition that only construction debris was allowed.

“Most of the time, they do this to save on levelling costs for future development projects. But a few who had gone to check their lands told me they were shocked to find e-waste and toxic materials being dumped at their sites, ” he said.

“Farmers have complained about acrid smoke coming from neighbouring lands where illegal recyclers in the process of extracting precious metals from rubbish have made it difficult for them to breathe, caused their eyes to water and left a burning sensation in their throats.

“I have seen battery recycling factories dumping their waste directly into drains and workers from a nearby mushroom farm running out onto the street with towels over their noses because of noxious fumes emanating from a neighbouring chemical factory.

“When they went back to check on their mushrooms, the plants had dried up, possibly from exposure to toxic fumes, ” he recalled.

While the latest circular by MPKL is seen as a step forward towards addressing the dumping issue and the environmental problem, he said further efforts could be made to step up enforcement to nip the problem in the bud.

An action committee set up with the participation of the Environment Department and Kuala Langat District and Land Office, for example, would complement ongoing efforts towards a cleaner Kuala Langat, he added. Lai says customers will no longer have the freedom to shop around for the best price.

“In the past, there was a clear line between domestic and commercial wastes.

“The former is handled by the local councils and the latter by private contractors.

”Now that KDEB is taking over the commercial sector, contractors are worried they may lose their customers, ” he said.

Among the questions that have cropped up involve billing arrangements for services and equipment such as waste bins and trucks.

“It is still unclear to us how KDEBWM intends to subcontract the work and whether we will have to go through a tendering process to get customers.

“MPKL should appoint a panel of contractors and approval of licensing should be based on this list. This way, there is free competition, ” Lai suggested.

Describing the announcement as sudden, he said Sowaco members felt MPKL should not tar all those providing waste services with the same brush as fly-tippers.

He pointed out that illegal dumpers could be anyone, from factory owners to fly-by-night operators, and that the council should increase enforcement to prevent illegal dumping.

Legitimate waste operators had taken years to build their business, often with much investment, time and the acquiring of expertise to deal with different kinds of waste, and MPKL’s decision had blindsided them, he said.

Lai also pointed out that KDEB did not have its own sorting stations.

“That means all wastes collected on their end is sent to the landfill immediately.

“Space in landfills is limited. It is essential to ensure minimal waste is sent there.

“Instead, they should be recycled where possible, ” he stressed.

He said appointing one company as the main contractor would also result in higher cost for factory owners and manufacturers as they no longer had the freedom to shop around for the best pricing.

A check by StarMetro found that charges by KDEBWM (according to the MPKL circular) for haulage and rental of roll-on roll-off bins were almost double compared to those presently charged by private waste management companies.

When contacted, MPKL public relations and corporate unit head Mohammad Kamal Mohd Ramlan said that out of 368 licensed factories, 279 had their renewals approved as of Nov 18.

“Illegal dumping and environmental problems are the major reasons behind the council’s decision to make it mandatory for factories to appoint a single main contractor, in this case KDEBWM, to ensure waste will be disposed of in accordance with correct procedures, ” he said.

This decision was confirmed at a council meeting on Aug 27 last year, after it was brought up during a meeting to discuss matters about business control and health two weeks earlier.

“In the past, factories were allowed the freedom to appoint their contractors. However, this failed to solve the illegal dumping issue.

“Instead, the council ended up having to expend time, manpower and costs to carry out 24-hour monitoring, enforcement and cleaning up of illegal landfills.

“The council also had to deal with odour problems plus the spread of vector-borne infectious diseases.

KDEBWM managing director Ramli Mohd Tahir told StarMetro that the new process would start with MPKL instructing them to liaise with the factory owners who would be offered council-approved waste disposal service packages.

“The owner will then issue an offer letter to KDEBWM detailing the terms and conditions, and the waste management company will then appoint a sub-contractor to start collection.”

Proof of work and all relevant claims must be submitted every month, he said.

As for claims that the cost of disposal for factory owners would increase once KDEBWM took charge of waste disposal in the municipality, Ramli said the company’s fees were higher as it included tipping fee which was RM55 per tonne.

“KDEBWM will also ensure that all the correct procedures to dispose of waste were followed.”

He reiterated that the decision to appoint KDEBWM to manage waste from the commercial sector was to enable better monitoring and other improvements for waste management in Kuala Langat.

He said among the key performance indicators set to ensure customer service satisfaction were following the collection schedules and the deployment of lorries equipped with monitoring systems to track the vehicles’ movement.

This system, he said, ensured the rubbish would be sent to where it was meant to go, at an approved landfill and not dumped by the wayside.

As KDEBWM would only be handling non-scheduled waste, the rubbish would be sent to the Tanjung Dua Belas sanitary landfill, which is run by Worldwide Environment, a subsidiary company under Selangor State Development Corporation.

KDEBWM is a wholly-owned subsidiary company of Mentri Besar Selangor Incorporated, which comes under the Selangor government. 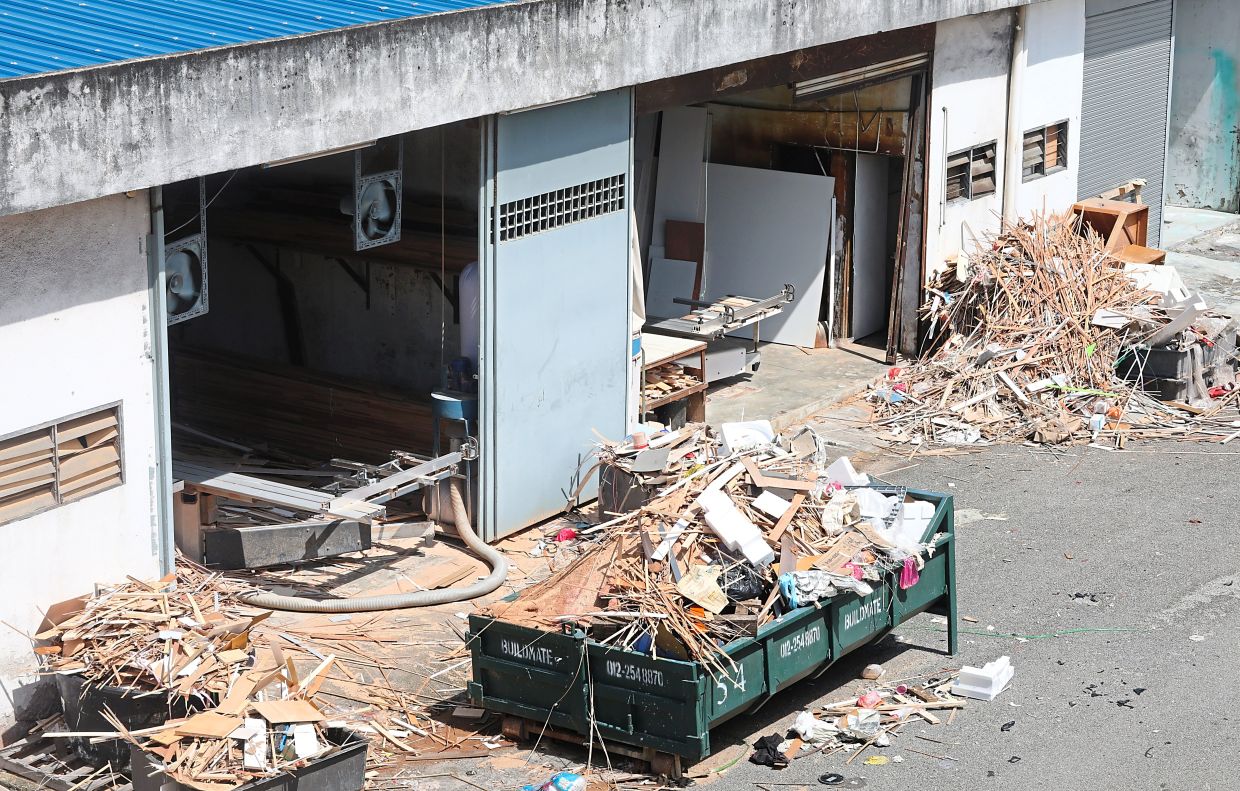 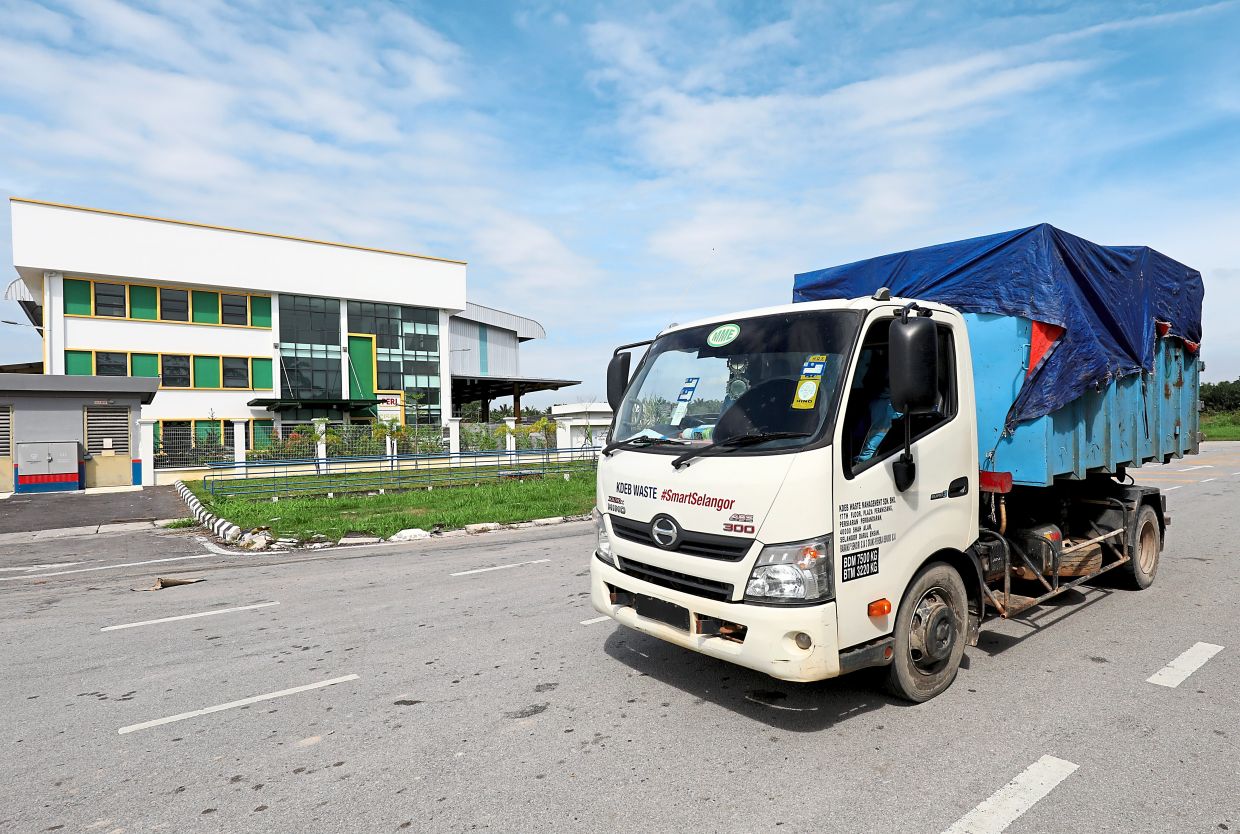 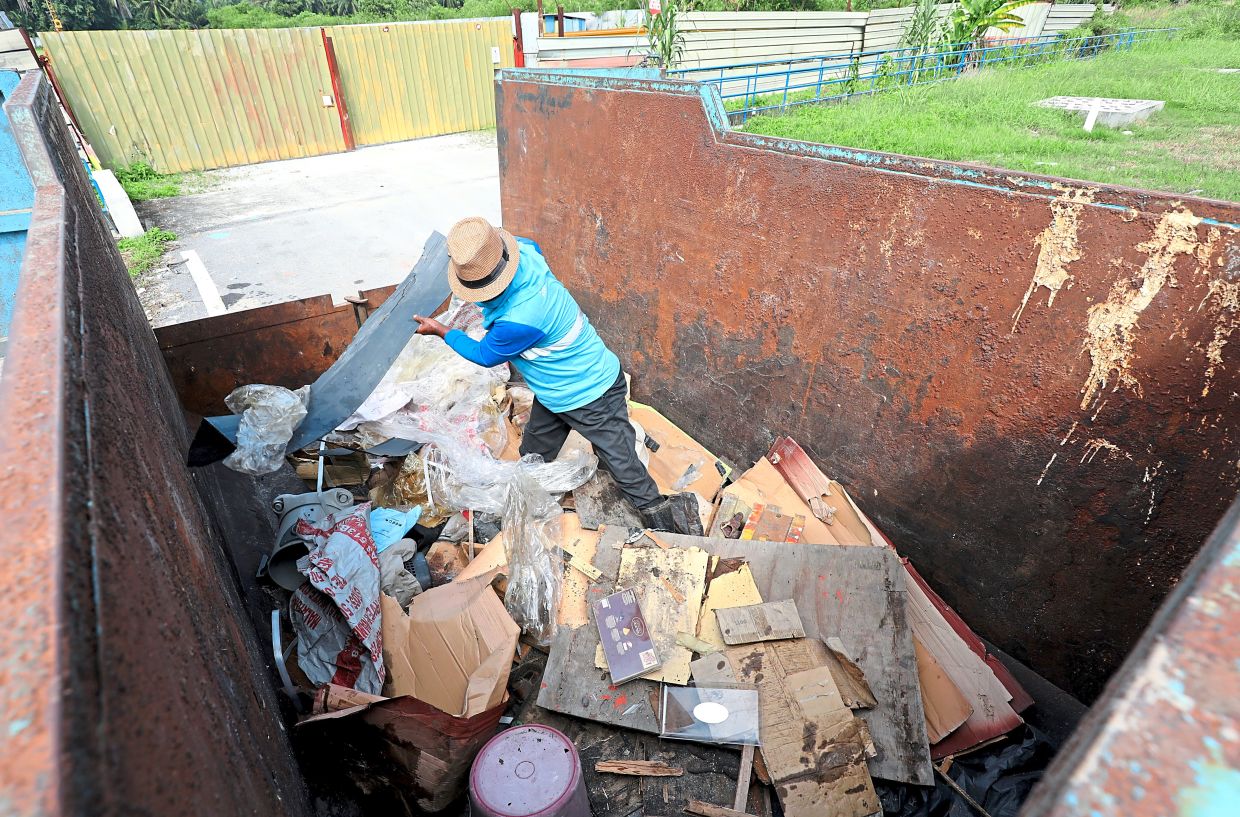 Piles of rubbish at factories in Taman Yayasan, a light industrial area in Jenjarom, Selangor. Many manufacturers do not hire proper licensed waste contractors to dispose of their rubbish. — Photos: SAMUEL ONG/The Star

Close up of wood chips from a factory in Taman Yayasan, Jenjarom. Many manufacturers allow the waste to pile up into an unsightly mess before eventually disposing them. SAMUEL ONG/The Star

A KDEB worker sorting through the rubbish at Kampung Jenjarum. Factories and manufacturers producing rubbish that falls under the industrial waste category must refer to the DOE’s website for a list of licensed transporters and waste facilities. 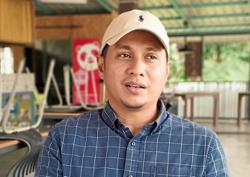