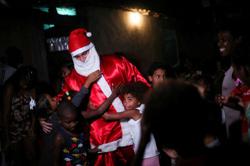 Ong’s house glows at night with its upside-down Christmas tree and lights, along with accompanying decorations such as Santa Claus, snowmen, poinsettia and reindeers. — IZZRAFIQ ALIAS/The Star

TUCKED along a row of terrace houses in Jalan Datuk Sulaiman 3 in Taman Tun Dr Ismail (TTDI), Kuala Lumpur, is a house that attracts attention with its striking Christmas decor.

Belonging to restaurateur Ernest Ong and his wife Lau Sook Ping, it has an upside-down Christmas tree and elaborate lights, along with festive decorations such as Santa Claus, snowmen, poinsettia and reindeers.

Passing motorists would either pull over or do a double take and make a U-turn, to take photos of the unusual decorations placed on the gate, balcony and front wall of the house.

“Very cool! I wonder how he found such a big tree and got it to stand upright, ” pondered Ali Imran Nurul Muiz.

The nine-year-old, along with his mum Jasmin Ramli and sister Iris Soraya, had made a short trip from their house in Bandar Utama just to view the tree and decorations.

“My kids were excited about it. I told them that in Australia, there were many houses with elaborate Christmas decorations during the festive season.

“I think Ong’s story on what prompted him to put up the tree is great too, ” said Jasmin.

Ong is one of the partners behind two popular food and beverage brands, namely Ali, Muthu and Ah Hock coffeeshops, as well as Tom, Dick and Harry (TDH) pubs.

“I turn on the lights between 7pm and 10pm, even when it rains. They are LED so they don’t consume a lot of energy, ” said Ong.

About 70% of the decorations came from TDH, while the remaining were from friends who work in event agencies.

“The tree frame was fabricated to be upside down. The RM10,000 tree frame had been used as part of the Christmas decorations at TDH Oasis Damansara for several years.”

On his motivation for putting up the decorations that will tentatively be on display until Christmas Day, Ong said he wanted to give the TTDI neighbourhood a treat.

“It has been a gloomy year and people are feeling down because of the pandemic. I want to bring a little light into people’s lives, ” he said.

“While I have been involved in a lot of community projects related to underprivileged homes, soup kitchens and flood relief efforts over the past seven years, I chose to minimise physical contact this year and came up with something different for the community.”

Che Zaara Afizul Aezwan said she asked her father to take her to see the Christmas decorations after Ong told her family about it when they had breakfast at his restaurant.

“I didn’t know what to expect. It’s very beautiful, ” said the eight-year-old.

“We cannot travel now (because of the pandemic), so seeing this house makes me feel like we are overseas. I love it!”

Ivy Mok, 37, brought her daughter Haelyn Yip, four, to take photos at Ong’s house since a trip to the malls to check out Christmas decorations this year was unlikely.

“Haelyn loves Christmas decorations. But I won’t be taking her to shopping centres because of the pandemic.

“She particularly liked the three reindeers (at Ong’s house), which reminded her of a family, ” said Mok, who also has a one-year-old.

“I have seen many drivers and delivery riders stopping by to take photos, ” said the Bandar Utama resident.

Ong told StarMetro that he had received both bouquets and brickbats on the decorations, with naysayers criticising the move as disrespectful, sacrilegious or even politically motivated.

“The positive feedback outweighs the bad. I get messages of gratitude from people who thank me for lifting their spirits and bringing levity after a tough year.

“The children who stop by are very excited. Most ask if they can go inside the house to see if there is another tree, Santa Claus or snow inside, ” he said with a laugh. 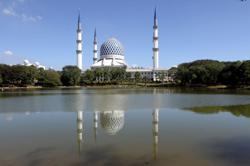