JOHOR BARU: Residents of low and medium-low-cost stratified housing welcome the RM125mil allocation under the national Budget 2021 for maintenance of their flats.

Apart from maintaining low and medium-low-cost flats, the allocation will also be utilised to repair dilapidated houses and those damaged by natural disasters.

Taman Perling Jalan Camar 13 flats resident B. Malarvali, 52, hoped the allocation would be used to maintain the cleanliness of low-cost flats.

The housewife and mother of two said she feared for her children’s safety as the area was a dengue hotspot.

She said some residents had been hospitalised for dengue fever.

“Fortunately, there are no fatalities so far, ’’ said Malarvali who has been renting the flat for the past 20 years.

She said grass was overgrown and the dumpsters sometimes overflowed with rubbish as waste collection was not fixed.

She noted that parking here was also a problem.

“By 6pm, most of the parking bays within the flats compound would be taken up, forcing some residents to park along the road.”

Another resident, sundry shop owner Anwar Hussein, 68, said it was high time for Taman Perling Jalan Camar 13 to be repainted.He said the nearby Jalan Camar 12 and Jalan Camar 14 flats were given new coats of paint and their drainage system upgraded about three years ago, but not the blocks at Camar 13.

Anwar said residents normally organised gotong-royong twice a year to clean up the area but not this year due to the Covid-19 pandemic.

Tailor Mee Hwa, 66, who lives at the 16-storey Larkin Flats, said she was quite satisfied with the general cleanliness of the place.

“It has improved compared to a few years ago.

“There is better awareness now among residents to keep their premises clean.

“Before, some will even throw rubbish down from their units on higher floors, ’’ she said.

However, Mee said the lifts frequently broke down, which caused inconvenience to residents, especially those living on the higher floors.

“I am lucky as my unit is on the second floor. I feel sorry for those including senior citizens who have to use the stairs when lifts malfunction, ’’ she said, adding that this problem must be resolved.

Sheikh Abu Bakar Sheikh Ismail, 55, who lives on the 14th floor of Larkin Flats, said he was fed-up with the frequent break-down of the lifts.

He said some irresponsible people also threw rubbish and even urinated in the lifts, causing an unbearable stench.

On parking here, he said residents should be given stickers and outsiders prevented from parking their cars at the flats. Malarvali hopes the allocation will be used to maintain the cleanliness of low-cost flats.

Anwar says it is high time for Taman Perling Jalan Camar 13 to be repainted.

Mee: The lifts at Larkin Flat break down frequently.

Sheikh Abu Bakar: Residents should be given stickers and outsiders prevented from parking their vehicles at the flats. 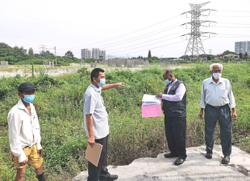