A group of senior citizens gathering and chatting at a bus stop near the Rifle Range flats in Ayer Itam, Penang. — Photos: ZHAFARAN NASIB/The Star

THE lack of responsibility shown by some people has put about 15,000 residents at Rifle Range Flats in Ayer Itam, Penang, in a state of uneasiness and fear.

Some were seen not wearing masks in a crowded public area while some failed to register themselves or have their body temperature scanned prior to entering business premises.

The residents living in nine blocks at the flats are worried that such non-compliance of standard operating procedures (SOPs) would cause the Covid-19 virus to spread into the community.

A market trader, who declined to be named, claimed that volunteers only scan the body temperature of customers and register them at the entrance from 8am to 10.30am.

“They don’t scan and register anymore before or after those times.

“Of course we are worried. How would we know if a customer, who arrives without being scanned, is sick or infected?

“There are over 100 lots here and each lot pays RM1 daily for the service, but it covers only the peak hours instead of from opening to closing hours.

“With the market often crowded with elderly people, we are at high risk, ” she said. 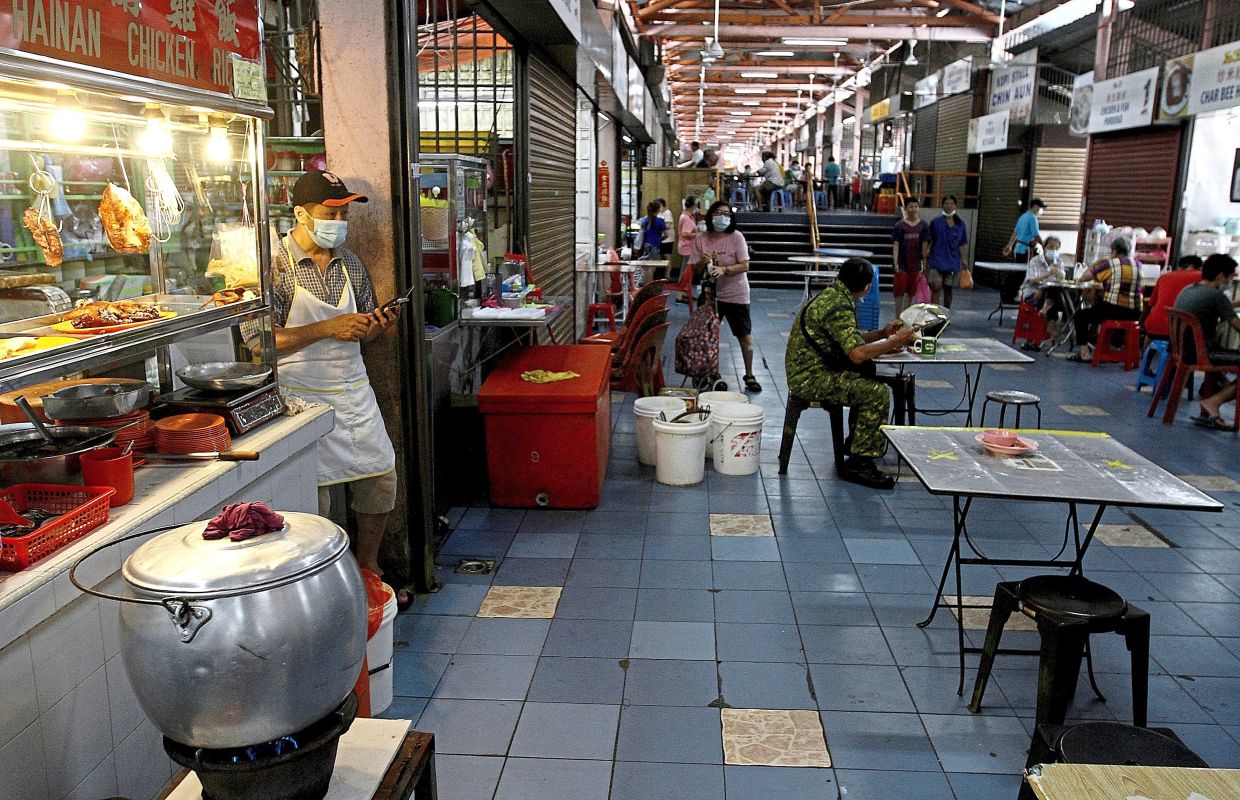 Tan (left) says his chicken rice business at the Rifle Range food court has dropped by half.

Checks by The Star recently found that market-goers were seen walking straight into the premises without registering their attendance after volunteers at the entrance had left.

Outside the market, some traders took their own initiative to ensure that customers complied with the SOPs.

Among them was food hawker Ong Eng Hooi, 62, who sprayed marking lines on the road in front of his stall for customers to queue up when ordering. He was also kind enough to help neighbouring stalls do the same.

“Most of our customers are regulars and residents in this area.

“When customers see the lines, each being one metre apart, they will instantly understand the need to queue up and stand apart, ” said Ong.

Meanwhile, an air of gloom hung over a nearby food court, where many stalls have closed down due to poor business.

Chicken rice seller Tan Hock Chai, 55, who started business there 30 years ago, said he used to sell about 15 chickens daily. 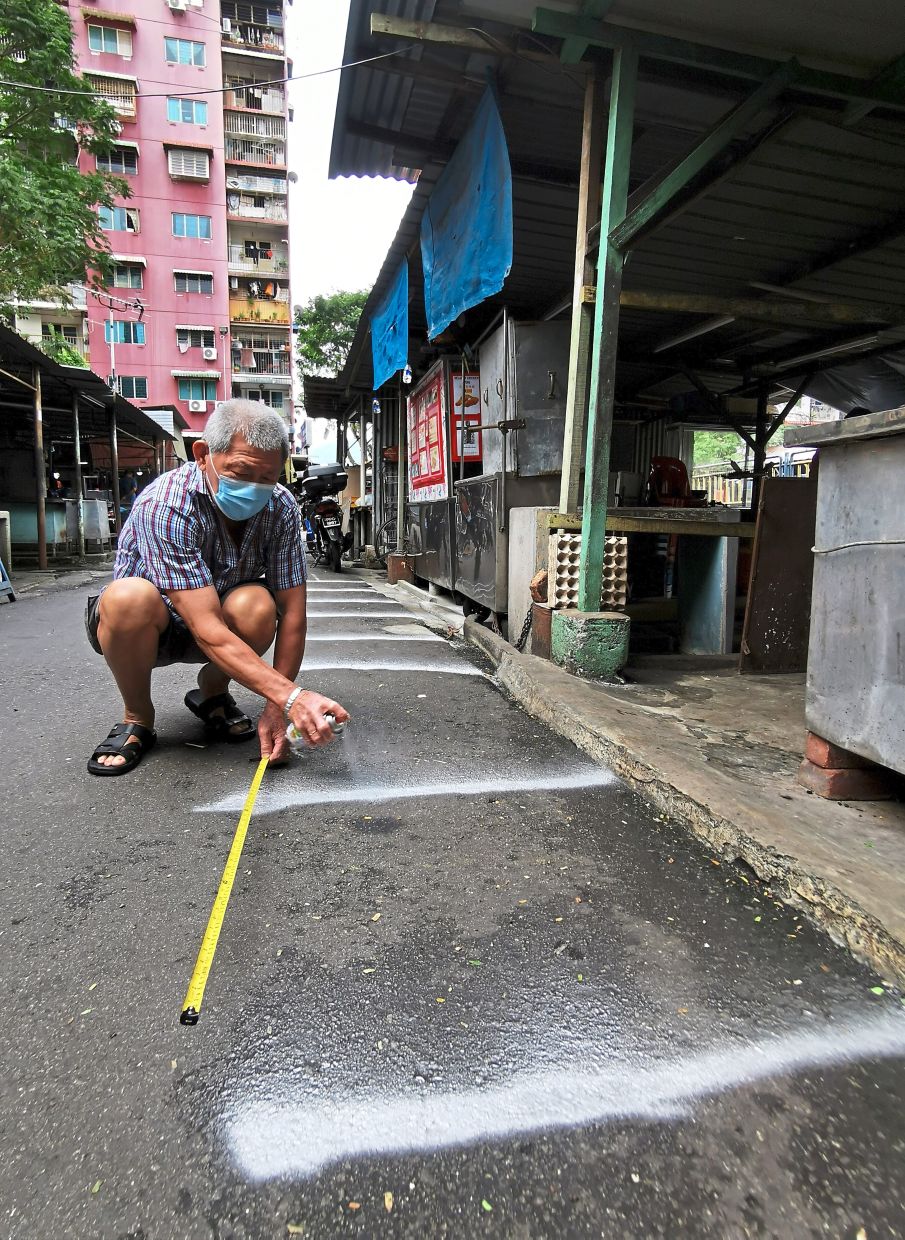 Hawker Ong has taken the initiative to spray lines on the walkway in front of his stall to assist customers in maintaining social distancing.

“But now, my business has dropped by half.

“I open at 7am because market-goers will buy food from the food court. Usually, the food court would still be crowded by 1pm but those days are over.

“Some stalls close early due to poor business but I have to stay open until late afternoon to clear the chickens, ” said Tan.

“Some residents are still unable to comply with all the required SOPs.

“We are going around advising them to put on face masks and avoid crowding, especially during this conditional MCO period.

“All shops here have complied with the requirements but there are stubborn customers who quarrel with business operators when told to follow the SOPs, ” she said.

She said with over 3,800 units in nine blocks at Rifle Range, there is no fencing around its perimeter. 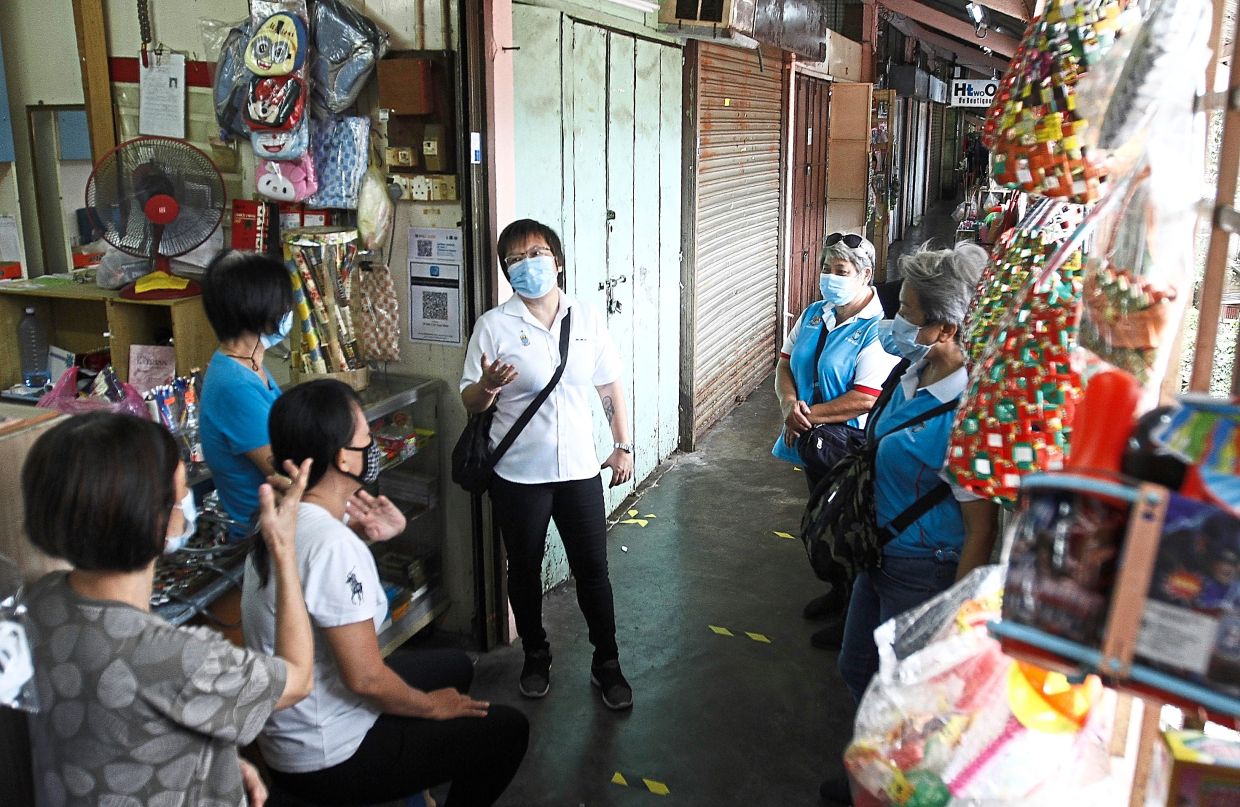 Jin (centre) chatting with traders while on a walkabout to advise the public about SOP compliance at the Rifle Range food court in Ayer Itam.

She urged residents to look after the safety of themselves and others.

“Visitors are able to reach homes without prior registration or temperature scans.

“We advise residents to reduce contact outdoors and stay at home unless it is necessary to go out, ” she said.

The council’s committee member Patsy Phuah, 63, who has been organising exercise lessons in an open space within the neighbourhood for the past nine years, said she decided to temporarily stop the lessons to prevent residents from moving about.

“I have about 400 members under the group and about 70 of them who are active.

“The sessions used to be every day but I have stopped them since two weeks ago, ” she said.

The Rifle Range Flats is one of the most densely populated areas in Penang.

The project was completed in the 1970s to provide affordable housing for the urban poor.