Rosida and Azmi (behind her) taking a ride on a Nadi Putra bus.

ALL Nadi Putra buses in Putrajaya will be free for Malaysian commuters from Nov 1.

Currently, the fare is 50sen per ride.

Federal Territories Ministry secretary-general Datuk Rosida Jaafar who announced this, also said a realignment of all 12 routes would be made to improve service.

She said the main T500 route would start from Kompleks E and pass through government complexes along Persiaran Sultan Salahuddin Abdul Aziz Shah in Precinct 1 (Kompleks A, B, C, D and E) and Persiaran Perdana in Precinct 2 and 3 until Dataran Gemilang in Precinct 4.

“Frequency of the T500 bus will be every five minutes during peak hours (from 6.30am to 9am and from 4pm to 6.40pm), 10 minutes during non-peak hours, and 30 minutes at night, on weekends and public holidays.

“The 11 other routes will go through housing, commercial and office areas outside Precinct 1 to 4, with a frequency of 15 minutes during peak hours, 20 minutes during non-peak hours and 30 minutes at night, on weekends and public holidays.

“Besides Putrajaya Sentral, which is the transit station, Kompleks E in Precinct 1 and Dataran Gemilang in Precinct 4 will also serve as a transit stop to connect passengers to other bus routes, ” she said.

The initiative would cost RM12mil annually, said Rosida, adding that she expected ridership to increase by 50% next year.

Rosida said they were looking at other ways to monetise the free service.

“Foreigners will be charged RM1.50 per ride.

“There are about 4,000 registered commuters and great demand for the bus service, ” she said after taking a short ride with Putrajaya Corporation (PjC) president Datuk Muhammad Azmi Mohd Zain to get a feel of the bus service.

“The ministry, PjC and Syarikat Pengangkutan Awam Putrajaya Travel and Tours Sdn Bhd, which manages the bus service, plan to increase the number of buses from the 10 available now to 40 in phases next year, ” said Rosida. 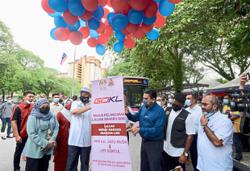