Zura Fiza (in white) and Faiza (in red) resuming their exercise routine at Taman Tasik Titiwangsa after the park was reopened to the public on Oct 19. — Photos: CHAN TAK KONG and ART CHEN/The Star

Only a few individuals, most of whom were senior citizens, were seen at the park located in SS7, Petaling Jaya, on a weekday morning.

“I think it is good that parks are kept open during the conditional movement control order (MCO) period, ” said Mark Ratnam, 76.

“It allows us to exercise in the open and enjoy the greenery. Being outdoors is good for our mental well-being too.”

He goes to Taman Bandaran Kelana Jaya about four times a week for brisk walks.

“I like it here. It is near my home, safe and usually doesn’t have a big crowd, ” said Mark. Choo (far right) and his three friends are disappointed to learn that Taman Persekutuan Bukit Kiara is closed.

“It is nice to be outdoors and breathe fresh air.

“It is also good for my health, ” said the former civil servant in his late 60s.

“As I have high blood pressure and high cholesterol, my doctor advised me to exercise regularly.”

Raz said he usually frequented the park with his friends, though he would have to be more cautious of exercising with them during the conditional MCO.

A pensioner who wanted to be identified only as Yeoh, said she exercised almost daily with her friends, whether at the park or Secita social club.

“I go to parks for walks or stretching, or the club for group activities such as line dancing and tai chi, ” said the Kelana Jaya resident.

“But the social club is closed during the conditional MCO, so I will be visiting the park more often.” A man looking at the signs placed at the main entrance to Bukit Gasing Forest Park, Petaling Jaya, which was sealed off as a preventive measure during the conditional MCO.

Yeoh said it was important for her to stay active through social and physical activities.

“However, my friends and I will be exercising on our own during the conditional MCO.

“We don’t want to get into trouble with the authorities, ” she added.

Petaling Jaya City Council (MBPJ) Corporate Communications officer Ahmad Iskandar Mohamad Mukhtar said park users were reminded to comply with the SOP under the conditional MCO, as stated in notices and banners at the parks.

“We will have enforcement officers patrolling selected parks.

“Staff from MBPJ’s Landscape Department will also monitor the parks periodically, ” he said. Mark says it is a good idea that parks are kept open during the conditional MCO as physical exercise helps with mental health too.

While parks in Petaling Jaya remain open throughout the conditional MCO, the entrance to the Bukit Gasing Forest Park in Section 5 is sealed off with police tape.

When contacted, Petaling Jaya OCPD Asst Comm Nik Ezanee Mohd Faisal said that after discussing with the Selangor National Security Council (MKN), the closure was done as a preventive measure.

Under MKN’s SOP for the conditional MCO in Selangor, Kuala Lumpur and Putrajaya, sports and recreational activities that do not involve physical contact and that can be carried out individually or involve not more than 10 people are allowed.

These include e-sports, walking, jogging, cycling, hiking, fishing and other activities that are done in open spaces.

Although parks are open in Selangor, the state government announced on Oct 14 that use of playgrounds and exercise equipment was not allowed.

Meanwhile, the National Landscape Department (JLN) and Selangor Forestry Department posted notices that parks under their purview would remain closed throughout the conditional MCO.

Kuala Lumpur City Hall’s (DBKL) parks were reopened to the public on Oct 19, shortly after Federal Territories Minister Tan Sri Annuar Musa announced that public parks in the federal territories could be reopened, after discussing the matter with MKN and Health Ministry.A DBKL spokesperson reminded that only activities such as walking, jogging, cycling and hiking were allowed at the 17 parks under its management. Rotina says JLN does not have enough security guards to ensure visitors at Taman Persekutuan Bukit Kiara adhere to the SOP.

“Visitors are not allowed to use the playgrounds and exercise equipment, ” said the spokesperson.

An eager Victor Choo and his three friends turned up at Taman Persekutuan Bukit Kiara the day after Annuar’s announcement, only to be left disappointed when they learnt that the park was closed as it was managed by JLN.

“My friends and I stay in different places around the Klang Valley, so we sometimes meet in one central location for our regular exercise, ” said the Subang Jaya resident, who walks between 10km and 20km daily.

“We walked from a friend’s house in Bandar Utama and wanted to continue the hike inside the park. But we had to head elsewhere since it was closed.”

Choo said the SOP for the conditional MCO was confusing because different government agencies had different guidelines on whether parks could open, so people were initially unsure whether they could exercise outdoors.

“I tried calling JLN to seek clarification, but my calls went unanswered.

“I prefer exercising in an open space, where I can enjoy nature and fresh air.

“At my age, regular exercise is very important in order to stay healthy, ” said the 65-year-old, adding that he practised physical distancing when out exercising. Health-conscious Petaling Jaya residents keep to their exercise routine at parks in the city while being mindful of the conditional MCO guidelines.

Faiza Tunor, who stays in Kampung Datuk Keramat, said her daily routine was to jog at Taman Tasik Titiwangsa either before or after work.

“I will jog in the morning or evening, depending on what time my shift is for the day, ” said the general clerk.

“When the park was closed during the conditional MCO, I would jog along its perimeter.

“There were not many people when I resumed my routine at Taman Tasik Titiwangsa this week.”

Faiza, 26, said she made it a point to exercise daily to keep herself occupied.

“Jogging in the park is also therapy for the mind. It’s very soothing to see the greenery and lake, ” she said. Visitors cannot use playgrounds and exercise equipment at 17 parks under DBKL’s management. Only activities such as walking, jogging, cycling and hiking are allowed.

“When the park was closed, I did more Tabata workouts at home, ” said the 24-year-old who is pursuing a degree in organisational management at Universiti Sains Malaysia.

“I prefer exercising outdoors. It’s important for me to exercise regularly to maintain good health and release stress.”

Zura said working out allowed her to take a break from her online classes and screen time with mobile devices.

“DBKL and other agencies that allowed parks to reopen may have enough enforcement officers to ensure people adhere to the SOP.

“But JLN only has about 20 security officers working across three shifts who are tasked to monitor Taman Persekutuan Bukit Kiara, which is a huge park, ” she said.

Rotina said Taman Persekutuan Bukit Kiara had between 3,000 and 4,000 visitors daily on weekdays.

“They comprise young children to senior citizens. Many come in groups for activities such as hiking, jogging and cycling, ” she said.

“If the park is reopened, people are likely to gather and exercise together, so it will make it harder for our officers to remind them to follow the SOP.

“Another concern is that some of the park visitors are people aged 60 and above, who are at high risk of contracting Covid-19.”

For the safety of visitors and park workers, and since Taman Persekutuan Bukit Kiara is located near neighbourhoods classified as red zones, Rotina said it was better to keep it closed for the time being.

“Those who want to enjoy recreational activities can do that individually within their housing areas or neighbourhood parks.

“It is our collective responsibility and commitment to fight the pandemic, ” she added. 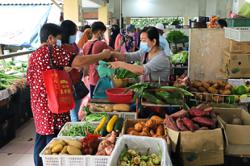