THOSE who have made their home in Tanjung Sepat on the coastline of Selangor want the state government to consider the replanting of mangrove trees here to act as wave breakers.

Resident Yusof Shahardin, who has been living there for 10 years, said that while there was a 2km bund stretching from Kampung Jangin to the Kampung Batu Laut Yacht Centre, the remaining 1km of coastline in the area was left unprotected.

The 59-year-old fisherman said this left 10 to 15 houses along the shoreline vulnerable.

Yusof, who is also the newly elected chairman of Amal Relief Malaysia (Arif) Sepang, the charity arm of Amanah, said many of these families had a household income of below RM1,000.

“The planting of mangroves will be a cheaper alternative to a bund made of rocks, as we see it.

“But residents are unable to carry out this replanting exercise on their own. 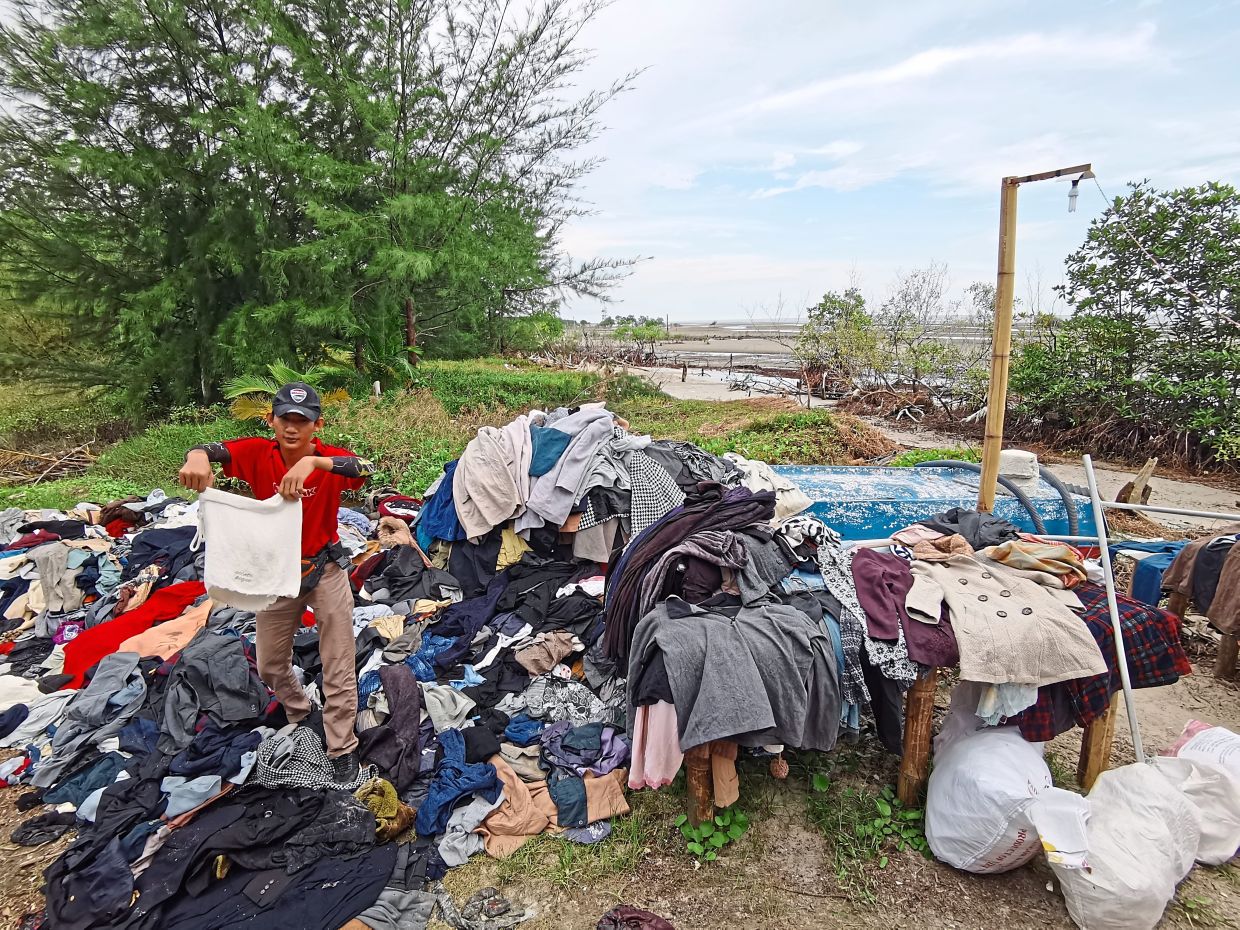 Two lorry-loads of discarded clothes behind Yusof’s house waiting to be used as sand traps for a DIY bund.

“The cost of one mangrove tree is RM20.

“So, to plant a mangrove forest over a 1km stretch, will require at least RM20,000. The residents cannot afford it, ” he said.

He said if the state government would consider planting casuarina and mangrove trees for Batu Laut like what was done at Cunang Beach, it could draw tourists to the area too.

Meanwhile, incoming seawater had left Yusof’s backyard in a mess. The ground was muddy and a mountainous heap of preloved clothes laid next to his beach shack.

On the beach were used tyres piled on top of each other like pillars.

Some had been fastened to branches of dead trees, looking like spiked bollards standing guard at a fort entrance. Yusof’s mother, Jamillah Aishah Abdul, showing where flood waters have come right up to the side of their house in the past.

The old clothes and tyres make up the makeshift bund.

One remaining plus point is that the beach is still teeming with sea life and fresh clams can still be dug out from the mud there.

Azlee Ismail, who is from Intelek Progresif Sepang, a charity branch of Arif, has been helping Yusof build a 600m-long bund from recycled materials in a bid to protect the latter’s backyard.

Batu Laut is one of the areas affected by the yearly high tide phenomenon that hits the coast of Klang, Sepang, Kuala Langat, Kuala Selangor and Sabak Bernam in Selangor.

At normal times, waves reaching heights of one to two metres are not uncommon, but during high tide phenomenon, Sepang fishermen say strong winds and rain have created waves that are about 5m high.

After the most recent episode in mid-September, the Meteorological Department predicted the high tide to occur again from Oct 17 to 19, and from Nov 15 to 16.

There is much at stake for Yusof, a father of two.

As soon as the movement control order entered the recovery phase, he began working on his plan to turn his backyard into a budget campsite to generate extra income. Yusof showing fresh clams that can be dug from the shores near Kampung Batu Laut.

In addition to an open-air beach shack, he has built facilities such as a toilet, bathroom and a freshwater pond rearing tilapia, catfish and snakeheads.

Yusof, who shares his home with his 80-year-old mother, wife and 25-year-old son, invested close to RM5,000 from his EPF savings into the project.

It may not sound like a big sum but then, his source of income for now is an allowance of RM250 a month from the Kuala Langat Fishermen Association.

In addition, there was a RM7,000 investment from Azlee and RM6,000 aid from Sepang MP Hanipa Maidin, to consider.

“This place was intended as a tourist destination for local budget campers.

“We wanted a place for young people from the city to experience digging for clams at the beach and to have a feel of what it would be like to live by the sea, ” said Yusof.

But when the waves started to come in and sand began to cover the soft patch of grass at the campsite, he knew that if he did not act, he could lose his activity shack and washrooms too.

He has had to rebuild the makeshift bund three times since work began on Aug 12 with help from 10 volunteers who called themselves the Black Jacket Group.

The makeshift bund is his only hope of breaking the incoming waves and preventing saltwater from entering his freshwater pond.

So far, Yusof has brought in four lorry loads of used tyres and another two of discarded clothes which are all sitting in his backyard for this purpose.

“The tyres and old clothes act as sand traps.

“We have been adding other materials like bamboo and dead wood from mangrove forests into our bund, ” he said.

Public donations have been helping him in terms of materials and manpower.

But he still has to pay the lorry drivers and until the high tide phenomenon comes to an end for the year, there will be sleepless nights for Yusof who has to keep watch for rising waves.

“Whether my campsite will remain safe after the high tide phenomenon, I leave it to God.

“For now, I am making use of this time to gather the young members from my organisation together for the bund-building activity that will foster the spirit of teamwork and camaraderie among them, ” he said.

Selangor public amenities, agricultural modernisation and agro-based industry committee chairman Izham Hashim said studies were being carried out to identify all low-lying areas along the coastline for the upgrading or building of sea protection bunds or wave breakers.

“It is an ongoing process. Most are already built.

“The areas where the bunds are weak are normally made up of earth. They are already being upgraded into heavy duty rock armour bunds.

“The process will be carried out in stages throughout all coastal lines and for river bunds in Selangor, ” added Izham. 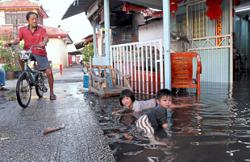 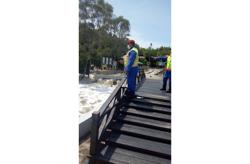