Always alert and ready to face any eventuality

SAADON Mokhtar always believes in learning from the past to make the present better.

Citing the recent Beirut blast in Lebanon as an example, the Penang Fire and Rescue Department director said they could pick up a thing or two from the incident that killed at least 190 people and injured 6,000 others.

“From time to time, we always learn from the happenings in the global scene.

“We brainstorm, and plan what we should do if the same thing happens here.

“We are on alert on what is happening around the world and take lessons from it, ” he said.

On Aug 4, a massive blast decimated Beirut port and devastated large parts of the city. The explosion is believed to have been caused by a fire that ignited a 2,750-tonne stockpile of explosive ammonium nitrate.

The material had been stored at the port since 2013 with few safeguards despite numerous warnings of the danger.

Saadon said they had come up with countermeasures for any eventuality, including preparing rescue and action plan, evacuation exercise and coordination of various rescue agencies.

A former Fire and Rescue Academy Central Region commander, Saadon, 57, has over 800 firefighters and officers under his care in Penang.

They are stationed at 20 fire stations and a headquarter in Batu Kawan on the mainland.

The Penang Fire and Rescue Department has four zone offices and a forward operational base in Bertam, which functions as the department’s air unit in the northern region.

In terms of assets, the Fire and Rescue Department in Penang has 27 fire engines, seven water tankers and four turntable ladder vehicles.

Recalling his experience when the country was first hit by Covid-19, Saadon said firefighters were always on standby mode to face any eventuality.

He said he had to ensure his staff followed the standard operating procedure (SOP) during operations.

“With this pandemic, we have to practise the new norm as advised by the government.

“As the frontliner facing the unknown, we have to follow all the safety rules such as wearing personal protective equipment uniform, face masks and so on.

“SOP is important. Before our personnel report for daily duty, a health inspection will be conducted on them to make sure they are in the pink of health, ” he said.

Saadon hopes the public would always be mindful of the current pandemic threat and remember to follow the SOP as instructed by the government.

“We must help the government stop the chain of infection and ensure that Malaysia is safe from the virus, ” he said. 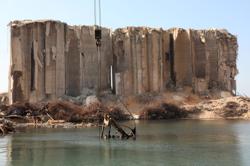 In Beirut port, all of Lebanon’s ills are laid bare 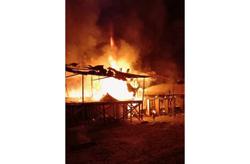