THE cost of the restoration work on Penang Wadda Gurdwara Sahib has increased to RM5.2mil from the estimated RM4.5mil back in September last year.

The restoration, which is expected to be completed in two years, has become a challenge because of the Covid-19 pandemic and lack of funding and donations.

“However, we are confident we will be able to raise the funds by next year as we are aggressively working on it,” said Mahinder in a press conference held by local government committee chairman Jagdeep Singh Deo at the gurdwara in George Town on Wednesday.

Jagdeep said a RM50,000 grant was approved for the gurdwara under the state’s Non-Islamic Houses of Worship Fund.

Earlier, heritage architecture and cultural anthropology consultant Dr Gwynn Jenkins said phase one of the gurdwara’s restoration involves digging the ground and looking at the foundation, checking the levels of the floor and opening part of the staircase.

“The gurdwara is a brick and lime plaster low-bearing building, and we need to drill the walls to see if there is lime plaster underneath,” she said.

Jenkins said phase two would involve moving the people to the back of the building while phase three involves stripping the staircase and opening up a section of the prayer hall to look at how it was built. Jagdeep (middle) flanked by Daljit (left) and Jenkins when addressing newsmen during the press conference on progress of the restoration work at Wadda Gurdwara Sahib in Penang. (Right) Filepic of the place of worship in Jalan Gurdwara, Penang.

(From right) Jagdeep, Jenkins and Daljit taking a closer look at the walls at Wadda Gurdwara Sahib in George Town, Penang. 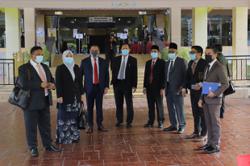