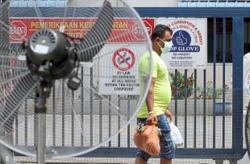 Mohd Fauzi (second from right) with heads of departments during his official swearing-in as MPAJ president. — NORAFIFI EHSAN/The Star

RESIDENCES turned into factories are flourishing in Ampang Jaya and many of them are operating without valid business licences or permits.

According to Ampang Jaya Municipal Council (MPAJ), some 68 out of 235 mostly residential lots had been turned into factories and are operating without council approval.

“We are carrying out a census to determine the number of illegal factories so that they can be legalised through our programme.

“Of course, they will be subject to the necessary rules and guidelines for operating such businesses, ” he said after his official swearing-in as the new MPAJ president.

Mohd Fauzi added that many of the factories had been operating illegally for about five to 10 years.

“We are giving them until Dec 31 to legalise their operations, after which we will take the necessary action, ” he said, adding that many of the factories are located in Kampung Baru Ampang.

On Monday, Selayang Municipal Council (MPS) had revealed that there were 308 factories operating without council approval.

A similar legalisation programme is being carried out and a briefing session with operators involved would take place this Friday.

This follows a notice issued by MPS to the heavy machinery maintenance factory at Sungai Gong Industrial Area in Rawang, which allegedly caused the recent river pollution that led to unscheduled water cuts last week.

Meanwhile, 53-year-old Mohd Fauzi is MPAJ’s eighth president, taking over from Datuk Abdul Hamid Hussain, who was transferred to take up the top post at Sepang Municipal Council (MPSepang).

A Terengganu native, Mohd Fauzi was Hulu Selangor District Officer before he was appointed as MPSepang president in 2018.

He will be overseeing MPAJ’s bid to seek city council status by next year.

“MPAJ had submitted its application to the state government last month for consideration and if successful, we will bring it to the Local Government and Housing Ministry, ” he said, adding that it had fulfilled the necessary requirements to be upgraded.

“With some 800,000 residents in Ampang Jaya, there are plenty of community-related issues that I hope to address during my tenure here, ” Mohd Fauzi said.

He also hopes to tackle the issue of illegal roadside traders by identifying suitable locations where they can be relocated.