Bags of rubbish left uncollected along Lorong Utara B near the Astaka Sports Complex in Petaling Jaya.

HEAPS of uncollected rubbish, stagnant water, discarded plastic bottles as well as the stench that comes with it, are never-ending problems for those living near the Astaka Sports Complex in Petaling Jaya.

A food and beverage trader in the area said the bags of rubbish attracted pests like flies and rats.

He said he had to pay a lorry driver RM100 a month to clear rubbish outside the premises where his business was located.

“They won’t clear the rubbish unless I pay them,” he said.

Resident CK Chong said responsibility for keeping the area clean should not only lie with the city council but the public as well.

“I don’t know why people indiscriminately throw plastic bottles, food wrappers and disposable containers everywhere around the field when there are rubbish bins nearby.

“There are also those who drink alcohol on the Astaka field and just throw the bottles and beer cans wherever they like,” he said.

Another resident said MBPJ should ensure the rubbish bins were in good condition.

“There is an old bin with a gaping hole on the side which has not been replaced,” she said.

The side of the sports field that runs along the back of The Spastic Children’s Association of Selangor and Federal Territories is also full of undergrowth and rubbish, with pools of stagnant water clearly visible, inviting mosquitoes to breed.

Walking along the path in the morning and evening was dangerous because of the mosquitoes, said Amy H.

“I worry if there are snakes lurking about too, because we will not be able to see them in all the undergrowth,” she added.

When alerted by StarMetro, MBPJ sent cleaning contractors to clear the waste on Friday afternoon.

A spokesman said the city council carried out daily scheduled clean-ups, where the KDEB contractors would manage the area along Lorong Utara B, while the contractors under MBPJ would do the cleaning at the sports field. 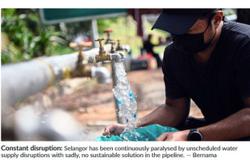 New ruling on rubbish bins for businesses in Klang