FACTORY owners and those in the manufacturing industry must bear the responsibility for occupational safety and health of employees on their premises.

The blast occurred last week at a warehouse at its port, where explosive material was believed to have been stored and it triggered widespread destruction across the city.

“We have to take this seriously in order to prevent such a tragedy from happening here.

“The responsibility to ensure this is prevented does not fall only on enforcement officers but also factory owners and those in the manufacturing industry to ensure safety aspects are adhered to and met with, ” he said.

The first was an explosion at Sungai Buloh Light Industrial Park in 2006, where a store with about 500 liquefied petroleum gas tanks went up in flames.

No one was injured as workers managed to run to safety but during a more recent incident, an ammonia gas leak at an ice factory in Shah Alam, saw two workers dead and 18 others injured.

“The safety aspects and regulations come under the Department of Occupational Safety and Health (DOSH) but at the state level, we are also actively monitoring factories to ensure they comply with the rules, ” said Amirudin.

He said the state had tightened the regulations from time to time but there was only so much the enforcement authorities could do if the owners themselves were not responsible enough.

“I hope that all in the industry will take safety very seriously and always be responsible for activities in their factories, ” he added. 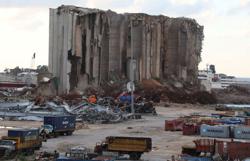