Not letting their guard down

By IVAN LOH And ILI AQILAH

Customers taking all precautions, including keeping their masks on at restaurants before their food is served. — Photos: RONNIE CHIN and ILI AQILAH/The Star

THE increasing number of Covid-19 cases has led to restaurant operators in Ipoh stringently adhering to the standard operating procedures (SOP).

They are being extra careful for their own safety and that of their customers.

This is also due to the MySejahtera app being made mandatory following the emergence of new clusters.Restaurateurs say customers too are more cooperative now when asked to follow the SOP, for fear of another wave hitting the country.

“We advised them to be vigilant and remind customers to observe the SOP, now that it is mandatory to wear masks.

“We also tell our members to urge their customers to cooperate by providing their full details like names and contact numbers.” Some restaurants have notices reminding customers to maintain their distance.

He said many operators were confused about the number of customers allowed to sit together at a table, as there was no clear guideline on this.

“They are not sure whether four people can sit at a table or to follow the one-metre physical distancing whereby a bigger table can seat up to six people.

“Some of us have been advised by enforcement personnel to follow the four-people rule, but we really hope there can be a black-and-white (directive) on this matter, ” he said, adding that no one wanted to be slapped with a RM1,000 fine.

Ooi said some members were also unaware of the person under surveillance (PUS) pink wristband and had been told to keep a lookout for people wearing these tags as they were supposed to be under home quarantine after returning from overseas.

Cafe owner Dawson Tham, 33, thought he was following the SOP by asking customers to scan their details into the MySejahtera app and taking down their temperature.

“Some policemen came by and told me that we were doing it incorrectly and that as business owners, we have to also jot down customers’ information despite them registering through the app, ” he said.

When new Covid-19 clusters emerged last month, especially the Sivagangga cluster in Kedah where a restaurant owner broke home quarantine rules, the government made it compulsory for all eateries to use the MySejahtera app. 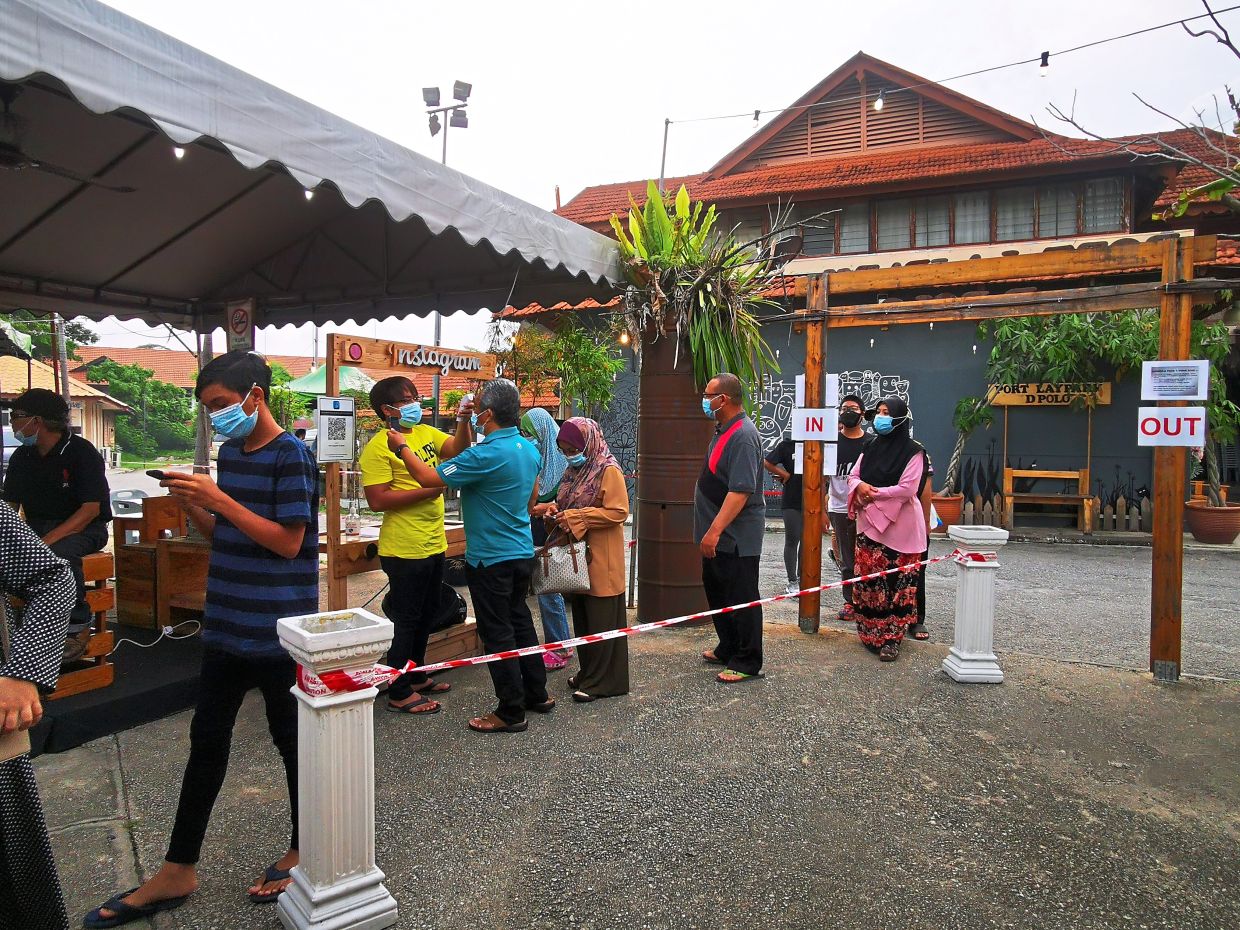 Customers getting their temperature checked and registering via MySejahtera before entering a restaurant.

A restaurant owner, who wished to be known only as Ahlan, 55, said he instructed his staff to check every customer for the PUS tag.

“We ask our customers to show their wrist and manually record their data even though they have checked in using the MySejahtera app.

“In addition, we have placed signs at the entrance to remind those with symptoms or with a PUS tag not to enter, ” he added.

Ahlan said customers were more cooperative now and were willing to have their temperature checked.

Another eatery owner, Jeremy Chan, 36, said he was initially unaware of the PUS tag.

“We did not know about it before so when we saw the picture on social media, we were shocked.

“I instructed my workers to immediately start taking extra precaution such as mopping the floor regularly and cleaning every table and chair after use, ” he said.

He hoped those with PUS tags would be more responsible.

“It is just 14 days, and if you are craving a particular food, you can ask your family or friends to get it delivered, ” said Chan. Businesswoman AC Lim, in her 60s, said the government should make it compulsory for eateries to station staff at the entrance to take customers’ temperature and escort them to their seats.

“There should be more control exercised by eatery owners, to be systematic rather than asking customers to take their own temperature and write it down themselves, ” she said.

Lim is also uncomfortable seeing people sitting too close to each other, especially when they are not wearing a mask.

“Although some of them may be family members or from the same household, it is just unnerving to see. I also avoid crowded places with long queues, ” she added.

Dania, a student, would wipe the chairs and tables at restaurants before sitting down.

“Although the staff may have cleaned them beforehand, I am not taking chances.

“I am spending more on hand sanitiser, face masks and wet wipes but I need to do what I can to protect myself, ” said the 22-year-old.

“Some of my friends have yet to visit any eateries as they are unsure if it is safe. Most of them would get their food delivered instead, ” she added.

Dania, an asthmatic, said she would also keep an eye on other customers when dining out. 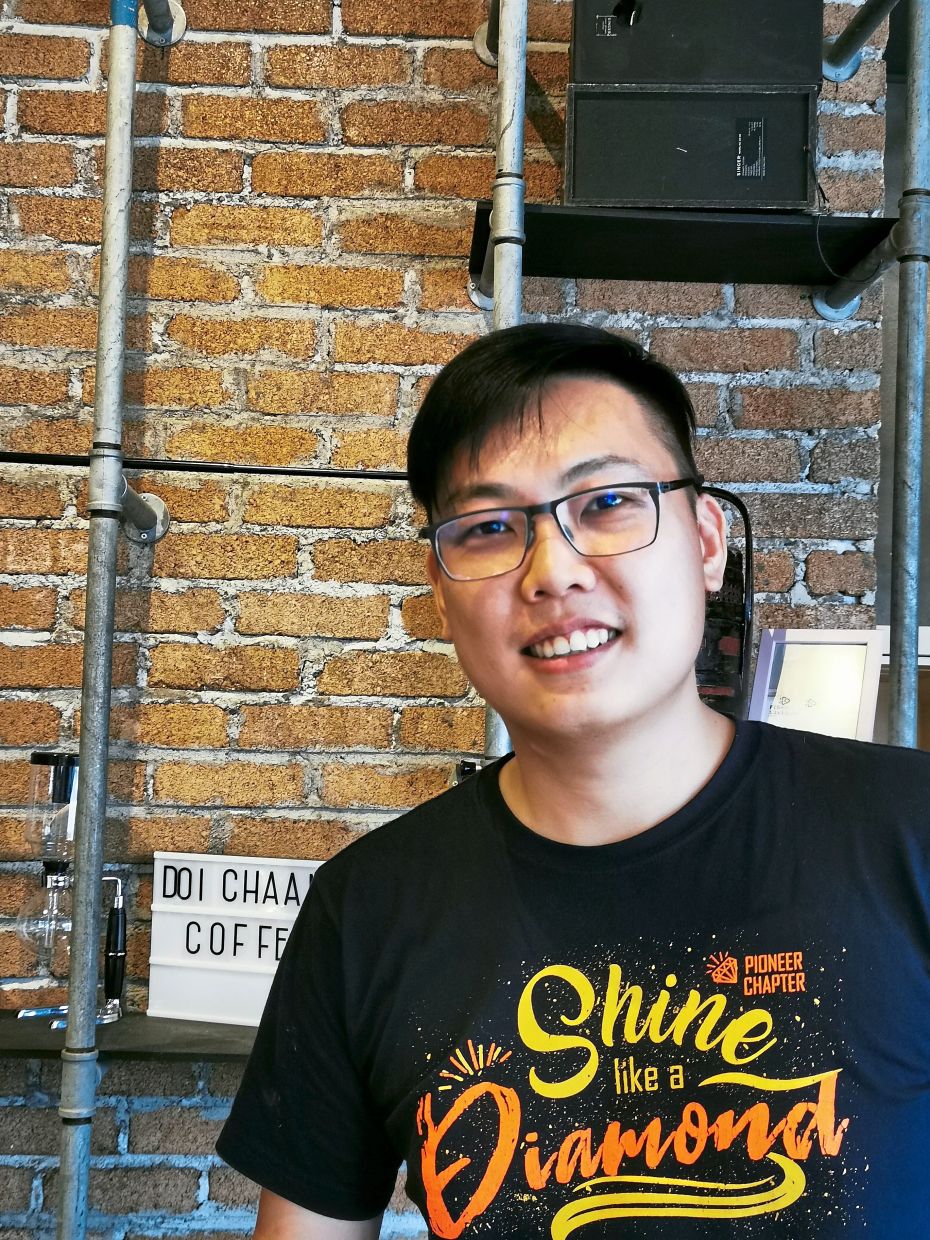 Chan was initially unaware of the PUS tag.

“I would take a look around first before ordering my food. If I see anyone coughing or sneezing, I would leave immediately, ” she said.

A housewife in her 30s, who only wanted to be known as Ashley, said many people were still unsure about the SOP.

“I have seen in some eateries, distancing was applied between tables but not for people seated at the same table.

“At some eateries, I needed to check in via MySejahtera as well as write down my details in a log book.

“I have also heard that some eatery owners were fined because their customers did not record their temperature despite having registered using MySejahtera, ” she said and called for the government to provide a clear directive on the matter to reduce confusion.“I think there are still some grey areas and the government cannot assume people will know what to do.”

Ashley said the public themselves needed to be more cautious and not let their guard down when dining out.

“At the end of the day, we still need to look after ourselves.

“If a place is crowded, it is better to go somewhere else.”

She said that as much as possible, she avoided eating out. “I just don’t feel comfortable if a place is packed, especially if the place is small, confined and air-conditioned, ” she added.