JOHOR BARU: A businessman thought he got a good bargain when he booked a second-hand Japanese SUV for RM41,000 on a social media platform.

He said the company offering the vehicle claimed that the SUV was a Singapore-registered vehicle and that its Singaporean owner wanted to dispose the 2015 model.

“He told me that under Singapore law, any private vehicle that was over five years old had to be disposed after inspection by the Land Transport Authority there,’’ Rahman said when met at the Johor Baru Consumer Claims Tribunal at Menara Ansar here.

He said the company’s representative, with whom he communicated via WhatsApp, had assured him that he would handle all documentations with the relevant authorities to bring the vehicle into Johor.

“I deposited RM1,250 into the company’s bank account as a booking fee on Jan 8 this year,’’ said Rahman.

“The payment was for insurance, road tax and transfer of ownership certificate which turned out to be fake,’’ he said.

He said the company’s subsidiary even forwarded the transfer of ownership certificate to him, including the change of plate number from Singapore-registered number to Malaysian plate number.

“I checked with the Road Transport Department to confirm the authenticity of the documents and the officer-in-charge told me my name was not in the system,’’ said Rahman.

The claimant lodged a police report when he realised he had been conned into buying a non-existent vehicle.

Johor Baru Consumer Claims Tribunal president ordered the respondent to return the RM8,350 paid to the claimant within 14 days.

The order was made in March but he has yet to receive the payment.

The claimant then filed another case demanding the company to return RM1,250 paid on Jan 8.

In a separate case, computer programmer Tan Chao Chong said he was happy to be awarded RM141.60 by the tribunal in a case against a workshop for being dishonest.

The 27-year-old claimant had claimed RM250 in labour charges for servicing his Japanese-made car at the authorised workshop on Dec 28 last year.

“I sent my four-year-old car for a normal service and I was charged RM768, including for replacing spare parts and changing lubricant oil,’’ said Tan.

The claimant said he had no problems with the bill except for the RM250 in labour charges.“It stated it was a two-hour service although it took only an hour to finish the job.”

Nadarajan ordered the respondent to return RM141.60 to the claimant within 14 days. 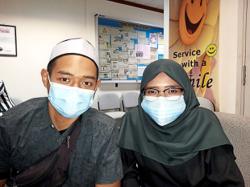 Couple get refund from wedding planner