RECENTLY-retired Azmir Aziz had been sick for over a month and needed immediate medical treatment but his fear of hospitals as well as worry over the cost, kept him away.

Mawar Medical Centre (MMC) and Tabung Kasih, a non-profit organisation which was set up two years ago to help poor patients, stepped in to allay both of Azmir’s fears.

Firstly, he has been referred to specialists without having to worry about the treatment bill.

for a host of ailments such as

hypertension, diabetes and renal function impairment, and that any delay would be detrimental to his health.

However, Azmir demurred and his condition worsened until he could neither eat nor walk unaided.

MMC chief operating officer (finance and business development) Jason Lee said the hospital, which is non-profit, decided to do its bit after being approached by Tabung Kasih.

“When the case was referred to us, we were told that the patient had an inherent fear of hospitals and that he also would not be able to afford treatment at a private medical centre.

“We decided to help him and provide him with the treatment that he needs, as part of our corporate social responsibility,” he said, adding that Mawar had helped many needy patients, especially those in the B40 category.

“We have helped some 100 needy patients get treatment at MMC since the Covid-19 outbreak, and Azmir is one of them.

“We will do our best to ensure he gets the best treatment available here,” said Dr Mohd Zaqrul, adding that the bulk of the cases referred to the hospital involved infants, children and adolescents.

“My husband only retired two months ago from a utility company and it was difficult convincing him to go to a hospital because of his fear.

“We are fortunate that MMC and Tabung Kasih have agreed to help,” she said.

Azmir’s son Mohd Rizal, 36, who works as an administrative assistant in a government department, said his father only agreed to get treatment at the medical centre after being told that his condition would worsen otherwise.

“We do not have the words to express our gratitude to MMC and Tabung Kasih for helping us in our time of need,” he added. 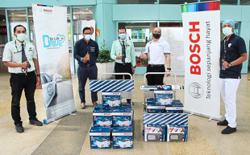 Ambulances get new batteries and wipers for improved safety