THE two vacant seats in the current Selangor exco line-up are expected to be filled by the month's end.

"We will be sure to fill the two vacant seats by Hari Raya Haji," said Mentri Besar Datuk Seri Amiruddin Shari.

He said this after presenting the three winners of the Selangor Maritime Gateway "Water Are You Doing" comic strip contest on Instagram on Thursday (July 2).

"The exco position held by Haniza Talha, which involves housing and urban living, is a very important and critical one so the transition for this portfolio is very important," he added.

Haniza was given the boot last week after she was suspended from PKR on April 6 for allegedly meeting former PKR deputy president Datuk Seri Azmin Ali and former vice-president Zuraida Kamaruddin at a hotel on Feb 24.

With her expulsion, she automatically ceases to be a Selangor exco member.

Meanwhile, the other vacant position with the tourism portfolio was formerly held by Selangor Bersatu chief Datuk Rashid Asari, who lost the post after his party left Pakatan Harapan in February.

"I have already met with Haniza and I even allowed her to join our exco meeting Wednesday (July 1) as there are still pending things to discuss," he said.

During the presentation ceremony, he also expressed appreciation for the initiative under Menteri Besar Inc to clean up and rejuvenate the Klang River.

"Since last year, we have been working with Ocean Cleanup where they have been cleaning up the Klang River with a gigantic vacuum machine called the Interceptor.

"Daily, it can collect more than 100kg of rubbish and we managed to improve the water quality from level four to three and I hope that we can reach level two soon.

"It is our hope and plan to make the river so clean that it can also be another of our water sources. It is quite an impossible mission but I believe we can achieve it," he said.

He added that public participation is very important to help improve the river's condition. 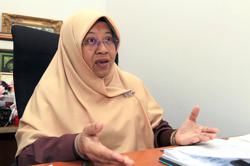