Tourism set to take off in Ipoh with major projects

“There will be more activities at Gunung Lang, including a bamboo park, extreme sports activities, trekking, remote control boat, archery and a petting zoo, ” he said in his speech during the full board meeting.

“At DR Seenivasagam Park, we are planning to build a ‘floating’ amphitheatre on top of a pond.

“We are also planning to set up an ‘Insectopia’, consisting of colourful replicas of bugs that have light features to shine during the night, ” he said, adding that these were still at the design phase.

Kinta River Walk would be further developed and brightened up.

“We want to turn it into a major recreational area. The RM3mil project will be carried out by the Northern Corridor Implementation Authority (NCIA), ” he added.

Also in the pipeline is a “light and sound show” project to be set up at Ipoh Padang.

NCIA will also be carrying out the RM3mil project which would have interactive features and story-based light projections.

Rumaizi also said the old post office building, located behind the Ipoh Town Hall, would be restored to become an art gallery.

“The project will also be carried out by NCIA and cost RM10mil, ”

On another matter, he said the city council was surveying several locations, including state reserve land, for its urban farming initiative.

“This initiative is meant to increase economic and job opportunities and reduce food imports, ” he said, adding that they were looking at an area of about 121ha in size.

It is also a step to make the city into an Ipoh Food Valley.

“Many people have lost their income, had their salary reduced and were asked to take leave so we wanted to help out, ” he explained.

Applicants must be at least 18 with a minimum PMR qualification or its equivalent and a credit in Bahasa Melayu.

Those who do not meet the minimum requirements, may be hired on contract.

Application forms can be obtained from http://www.mbi.gov.my or city councillors. 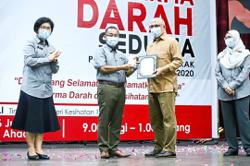