A trader arranging chicken at the Batu Lanchang wet market.

CONSUMERS Association of Penang (CAP) is outraged by the increase in chicken price from RM9 to RM11.

The association said chicken prices had increased by between RM1.50 and RM3.50 within a week during the third week of this month.

“Sellers told our research officer that the increase is attributed to additional costs incurred by farms that slaughter, dress and transport the chickens to sellers.

“We call upon the ministry to check if the price increase is justifiable as consumers are finding their servings of chicken shrinking in size at eateries, ” he said.

Mohideen said if chicken processing in farms is the cause of skyrocketing prices, then the government should heed what CAP suggested in March that all markets be allowed to slaughter chicken.

“Selling ‘factory-dressed’ chicken does not serve the interest of consumers, moreover at preposterous prices, ” he said.

It was reported in February that the slaughter of poultry in Penang markets would be fully stopped by next October.

Six approved slaughterhouses on the mainland would do all that work and on the island, all sellers would have to collect dressed birds from a distribution centre in Batu Lanchang, expected to be ready next year.

The move was reported to affect 126 stalls at 26 markets and hawker centres that slaughter an average of 11,651 chickens a day.

They were given notices late last year and have two years to cease the slaughtering work.

The objective of this move is to reduce environmental damage caused by wastewater from chicken slaughtering activities flowing into the public drainage.

Meanwhile, the ministry’s Penang enforcement chief Chin Ching Chung said the department had investigated the increase of chicken prices in the state.

He said five suppliers from several areas in Penang were issued with notices, asking them to explain the price increase.

He added that they would decide on the next course of action once the suppliers had given their explanations.

“We expect them to get back to us by end of this week. We will study their explanations before deciding on the next course of action, ” he said. 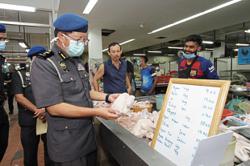 Putting the lid on chicken prices 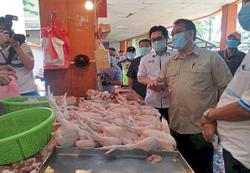