A KPDNHEP officer conducting inspections at a supermarket in Johor Baru.

Its director Mohd Hairul Anuar Bohro said the checks on wholesalers and public markets were done from May 20 to May 31.

“A total of 26 traders were compounded under the Price Control and Anti-Profit Control Act (AKHAP) 2011, with fines totalling RM37,000.

“Some 23 cases involved traders who had failed to display price tags on the items and three cases involved selling items beyond the allowed price,” he said when contacted.

He said checks also showed there was enough supply of food and other essential items in Johor.

Of the figure, RM54,000 in compounds involved traders not displaying price tags and RM150,000 for selling items beyond the allowed price. 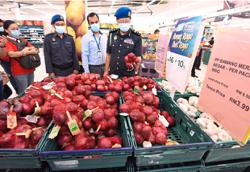