Norfiza (in pink tudung), accompanied by MPK enforcement officers, trying to convince a homeless man to go to Dewan Pelabuhan Klang for a Covid-19 test.

HOMELESS people in Klang are being offered free Covid-19 tests and temporary shelter at Dewan Pelabuhan Klang, a multipurpose hall in Port Klang, as part of a concerted effort led by the Klang District Disaster Management Committee (KDDMC).

The committee under the Klang District and Land Office is activated during a crisis.

Eleven homeless people had accepted the offer to undergo the Covid-19 test.

MPK president Dr Ahmad Fadzli Ahmad Tajuddin, who was at the hall, said KDDMC led the operations while other government agencies including Klang District MRCS assisted with Covid-19 screening for the homeless.

“It was a challenge to convince the homeless to do the Covid-19 test. It requires time to scour the town especially under bridges, in back lanes and abandoned buildings to find the homeless,” he said.

Dr Ahmad stressed that the individuals were encouraged and not forced to do the Covid-19 test.

“Our approach is to explain to them the need for the test. If they agree, they would be ferried to Dewan Pelabuhan Klang in Jalan Pekeliling where medical personnel would do a Covid-19 screening before a test is done,” he said.

It is learnt that during the screening, two homeless men were found to have irregular heartbeat while another had tuberculosis. The men were immediately admitted to Hospital Tengku Ampuan Rahimah General Hospital.

MPK Corporate Communications director Norfiza Mahfiz, who was in charge of gathering the homeless around Klang, said several homeless people came willingly to the multipurpose hall but a few ran off into the bushes

outside the hall upon seeing a police car.

It is believed that those who had run off may be drug addicts who are worried about getting arrested.

Norfiza and five council enforcement officers had been going around Klang and Port Klang to convince the homeless to undergo the Covid-19 test and stay at the temporary shelter.

“Our operations to help the homeless will be done throughout the MCO,” she added.

“Concerted efforts coordinated by KDDMC will help support homeless people who are particularly at high risk of contracting communicable diseases. It is good that a temporary shelter is provided for them,” said Rajoo. 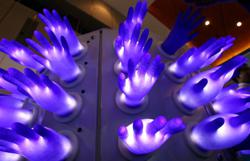