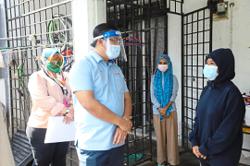 AN ILLEGAL plastic recycling factory at the industrial zone in Zurah, Rasa was sealed during a recent operation by the authorities.

In a press statement, Hulu Selangor’s environment control unit said action was taken following investigation carried out on May 6 based on a complaint made to the council.

During the operation, it was found that the premises was not locked and there were two individuals at the factory.

The authorities said the plastic recycling factory did not have a licence, planning approval, building plan from the council and Environmental Impact Assessment (EIA) from the DOE.

DOE sealed the machinery to prevent the operator from operating at the premises.

The local council’s Enforcement Department took action under the Trade, Business and Industrial bylaw and seized a welding set, gas barrel, plastic crusher and other items.

The council’s Building Department issued a compound to the premises owner for erecting the illegal structure.

MDHS said it would monitor the site regularly to ensure the operator of the illegal factory did not resume operations until they got approval from the district council and DOE.

“The factory does not have licence to operate, building plan, planning approval and EIA. Thus it had to be sealed.

“We want to warn others who are operating illegally to stop as the councils will continue to monitor closely even though they are busy dealing with the Covid-19 outbreak,” he said.

He urged the public to report to the authorities if they came across illegal plastic waste factories.

“It is important for the council and the public to cooperate to end activities that can affect the lives of surrounding residents,” he said.