High level of compliance in Ampang

About 3,500 families in need in the Teratai constituency have been given food aid like rice and canned goods.

Compliance with the movement control order (MCO) in Ampang has been encouraging with about 90% of residents adhering to it.

“The feedback from officers on the ground has been mostly positive. It is good to see people adhering to the rules on their own so that strict enforcement is not necessary, ” he said, adding that movement among residents usually happened in the morning when people went out to buy groceries.

“Markets and supermarkets tend to be busiest during this time, but even then we find that people are practising social distancing, ” said Abdul Hamid.

He said the high compliance rate was due to several factors, including limiting entrance points to public areas such as markets and controlling crowds in congested places.

MPAJ has also been using loud hailers in public areas to remind people to maintain their distance, use face masks when out in public and sanitise their hands before leaving markets and business premises.

People having their temperature checked before being allowed into Pasar Taman Tasek Tambahan in Ampang. (Right) About 3,500 families in need in the Teratai constituency have been given food aid like rice and canned goods.

Joint operations together with the police were also carried out based on reports of non-compliance at food courts and restaurants.

Only one incident was reported, where a food delivery rider was detained last week for disobeying the MCO and assaulting a policeman in Pandan Cahaya. A video clip that went viral showed the man hitting a policeman while being questioned.

He said teams were also mobilised to distribute canned food and rice to those in need, adding that 3,500 families had since benefited.

To make the process easier, Lai has made available a form online so that people can fill in their details which will be verified before the items are distributed. 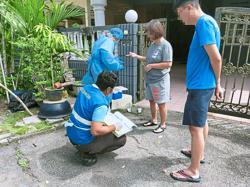 No more assessment bills by post in Ampang Jaya