The stimulus package, he said, proved that the Government has heeded the feedback given by SMEs and is sincere in helping them wade through testing times during the movement control order (MCO).

“Appreciation should be accorded to MCA president and Transport Minister Datuk Seri Dr Wee Ka Siong who, as the sole MCA representative in the Cabinet, took the effort to raise the voices of SMEs to the Government.

“He paid special attention to the problems that the SMEs encounter and took the opportunity to voice out their grievances.

“Some of the measures undertaken by the Government are lowering the foreign worker levy by 25% for all companies whose employees’ work permits expire between April and June this year. A trader arranging fruits at his stall during the MCO at the Batu Lanchang market in Penang.

Tan said these additional initiatives, which provide practical assistance to employers and employees, would definitely cushion the worries of SMEs, while simultaneously prove the Government’s sincerity and commitment towards helping SMEs.

“SMEs comprise 98.5% of all enterprises in Malaysia.

“It is therefore needed of the Government to assist them in overcoming the current challenges.

“It is hoped that through these initiatives, SMEs will cooperate with the Government to stabilise our nation’s economic development, ” he said. 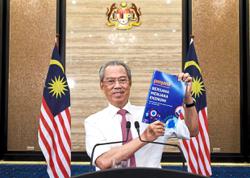