Emilia’s pets – Fafa the cat and Mei Mei the dog – are so bored at home that they have befriended each other.

ONE would think that the movement control order (MCO), has only affected the restriction of people. Wrong. Pets too have to undergo this adjustment, especially dogs.

Although canines naturally require exercise time, they are now limited to playtime with their owners within the house compound.

According to most of the dog owners who spoke to StarMetro, their pets were excited to spend long hours inside the house.

At the same time, the canines are also seeking more attention now compared to before the MCO.

So, dog owners are forced to find creative ways to entertain their pets and ensure they get enough exercise.

Jocelyn Ng Ai Ley, owner of a five-year-old Wooly Husky, said the MCO resulted in her being more lenient with snack treats for her pet, Isseymiyake.

“My husky is getting fatter. I bought a stash of bones for him to chew on because he will whine for attention otherwise. I know it is not good for him in the long run but I have to keep him occupied.

“He likes to disturb me when I work from home. He sits beside me all day long.

“As for his exercise routine, we have reduced it to just 15 minutes, ” said Jocelyn.

Nicole Fun and her three poodles Moto, Matchi and Maxy are having a lot of fun at home.

Fun said the three were extremely clingy with her and her boyfriend Jackie Ong now that they were all at home.

Besides ensuring enough food for her dogs, she has also stocked up on toys for them.

Before the MCO, she would bring the dogs to the groomer but now she grooms them at home with the help of her boyfriend.

As for exercise, she puts on poodle dance videos on YouTube and they dance together.

“The poodles are actually happy that they get to spend a lot of time with us and they are playing all day long, ” said Fun.

Tan Chun Lynn and her husband Stanley Clement Jeganathan have not much problem with their two-and-half-year-old mongrel named Abby. Thanks to their seven-year-old son, Ethan Paul, who spends a great deal of time playing with the dog.

“Abby is used to being at home most of the time. She cannot go for long walks now but my son plays with her a lot and that keeps her entertained, ” said Tan.

Having a landed property comes as a great help during the MCO for Joseph Gerald’s Belgian Shepherd and German Shepherd.

“I used to walk Heidi and Crystal about 7km daily. Now we allow them to play indoors only.

”We have more activities such as playing catch with the tennis ball.

”They are slightly bored but we manage with the space within the house and we don’t cage them so they are free to move about, ” said Gerald.

“Peanut likes to stay indoors and just hang out with humans. We play catch indoors to help him feel less bored, ” said Lim, who works from home during the MCO.

Human resource manager Emelia Ng is caring for about 10 rescued dogs that are old and disabled. She also has several cats under her care.

“The animals have their own characters and mood swings. Now that they cannot go out of the house, they run up and down the stairs.

“Sometimes they fight among themselves and I have to separate them.

”They mess up the kitchen and they all love toilet rolls, so I have to make sure they cannot reach any of it.

”But they are happy to have me at home now due to the MCO, ” said Emelia, who had to stock up about 18 bags of dog kibbles for her pets.

Experts advise dog owners to ensure their pets get enough exercise during the MCO period to ensure they do not fall sick.

“It should not be too difficult because dogs adapt easily. It is easy to teach them new tricks.

”One way to exercise them is using a hula hoop to make them run in one place, ” he said.

This way, he added, dog owners need not take their canine companions outdoors for physical exercise.

Society for the Prevention of Cruelty to Animals (SPCA) Selangor animal welfare officer Kelvin Cheah Kheng Tatt said owners must identify the category that their dog belonged to.

“There are two categories of dogs, the low to medium energy category and the high energy one.

“If a dog is in the low to medium category, the owner can give their pet a toy. They can also give it a box to play with and entice it with a reward such as food inside the box.

“The dog will tire within a few hours of play, ” he said.

For high-energy dogs, Cheah suggested a change in their diet.

“Owners could put their pets’ kibbles in different spots inside the house and make them search for food instead of putting food in their bowl. This will make the dog use up excess energy, ” he said.

Independent dog rescuer Adrienne Godfrey Johniu said owners could take their dog up and down the stairs at their home as a form of physical exercise. 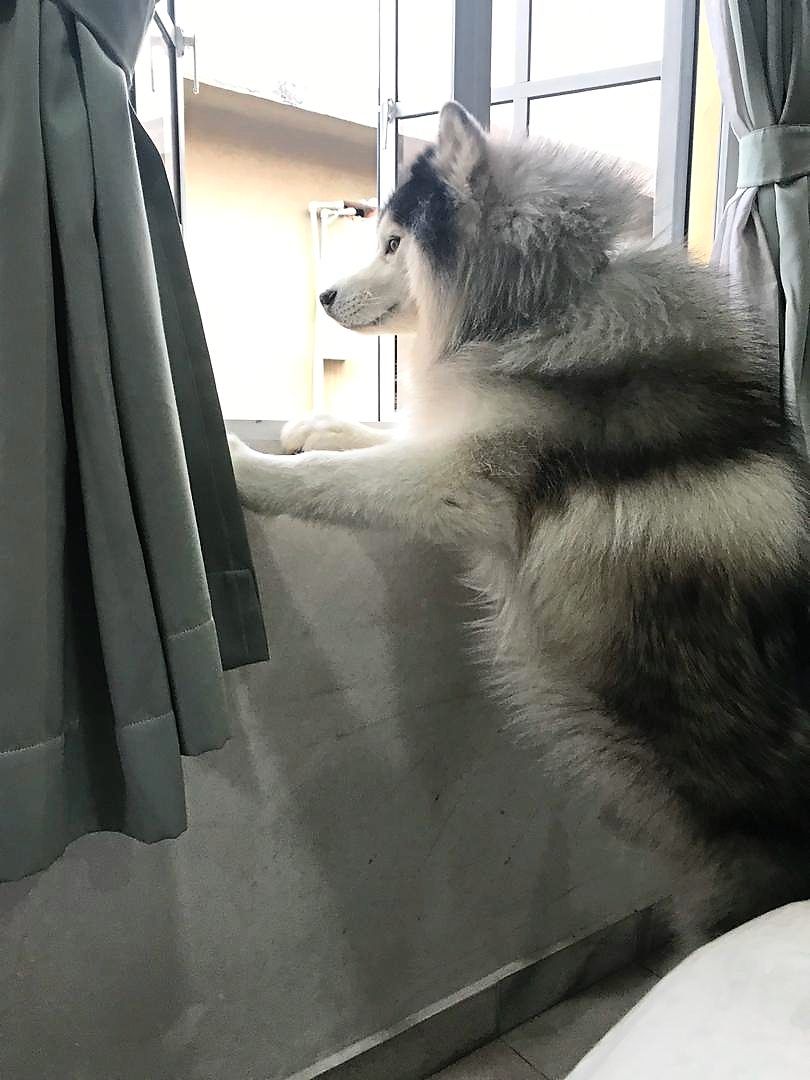 Emilia’s pets – Fafa the cat and Mei Mei the dog – are so bored at home that they have befriended each other.

To keep Moto, Matchi and Maxy occupied, their owners have bought them a lot of toys.

Stanley (left) does not have much problem managing his dog Abby as his son Ethan spends time with her.

Peanut likes to keep Lim company while she works from home.

Pets like Isseymiyake seek a lot of attention from their owners now compared to before the MCO started.

Gerald’s Belgium Shepherd spends a lot of time indoors and could no longer go for its daily 7km walk.

Having a landed property is great help for Gerald’s dogs, one of which is seen here playing with a tennis ball in the house garden during the MCO.