THE much-awaited affordable housing project The Park@Mak Mandin has received its Certificate of Completion and Compliance (CCC) four months ahead of schedule.

The housing scheme which was privatised by the state is the first of its kind in Bagan, Penang, and buyers can expect to move into their brand new units in a month or two.

Priced at RM247,000, each unit has a built-up space of 1002sq ft and comes with three bedrooms and two bathrooms. Standing on a 4ha (10acre) plot, the project offers facilities such as a half-sized Olympic swimming pool, fiber-optic Internet, a children’s playground and a gated and guarded environment.

“I am happy that several developers have already addressed this issue by providing larger units and good facilities such as seen here at The Park, ” he said.

Jagdeep said that to date, a total of 103,721 units had either been built, were being built and had been approved to be built in Penang. The living and dining areas of the show unit.

He added that the state would continue to support developers keen on delivering affordable housing projects.

Silver Channel director Datuk Musa Mustakim praised the state for the realisation of the project.

“Thumbs up for their double winning strategy which was relocating the squatters to safer and proper homes and secondly, allowing the future generation to own affordable houses in a strategic location, ” he said in his speech.

The project began in January 2017 and received its CCC early this year. 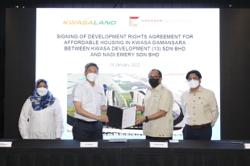