No longer a popular seat

Fewer visitors are patronising the ‘Boy on Chair’ mural due to ongoing construction work nearby.

THE number of visitors making a beeline for snapshots beside one of the more photographed murals in George Town, ‘Boy on Chair’, has dwindled lately — no thanks to ongoing construction work near the building where the mural is painted on.

Thousands of visitors used to mimic the boy’s cheeky act of reaching up to grab the toilet air vent of the prewar building at Cannon Street, but the place now has become an eyesore as the piece of land beside the building is filled with rubble.

And, the dark stains around the mural remind one of the days when visitors used to queue up to have their photos taken next to the mural, while leaning one arm against the wall.

A tourist who wished to be known only as Andy, said he was taking a stroll in the George Town heritage enclave and was shocked to see the ‘Boy on Chair’ mural in bad shape, with the seat broken.

“It is also difficult to access the mural now. I recalled my last trip here about six months ago, there was a beverage shack.

“Since the weather is hot, I returned to look for a drink recently, but the shack is gone. 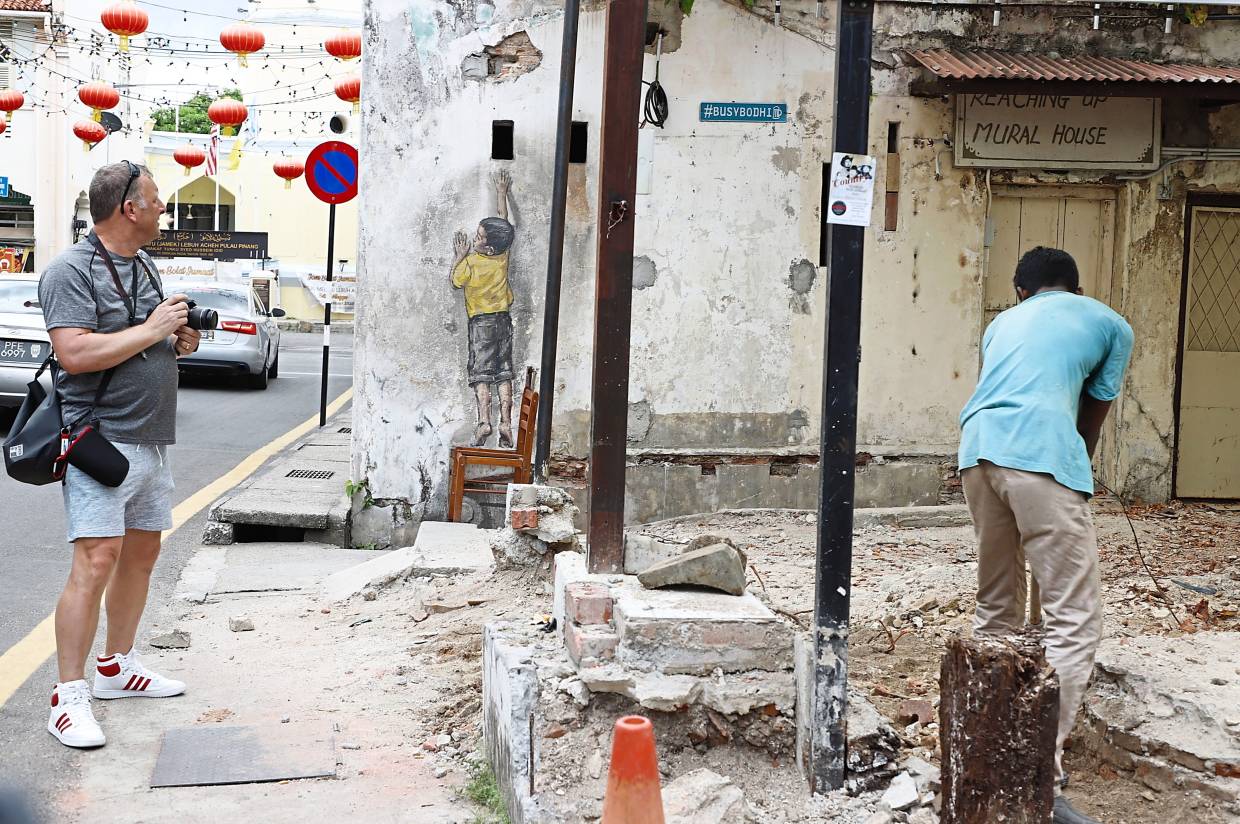 A worker carrying out construction work next to the ‘Boy on Chair’ mural in Cannon Street, George Town. — Photos by LIM BENG TATT and ZHAFARAN NASIB/The Star

“Several men were carrying out some clearing work and showed discomfort when I took photos of the scene.

“One of them even asked if they were in trouble, but when told that it was only a casual shot of the mural, they relaxed, ” he said.

Andy noted that streams of visitors walked past the mural, with only a few stopping to get quick glances of the mural.

“GTWHI has been observing this area, and has established the Public Art Review Panel to evaluate the mural paintings application within the world heritage site, with the aim that all mural paintings shall contribute to the enhancement of outstanding universal values.

“We also ensure that the paints used for these murals are water-based, so that the artwork do not hurt the heritage building.

“This is the main reason why most of the mural paintings within the George Town heritage enclave fade away with time.

“Like all other murals, it is the responsibility of the particular mural painting project applicant and building owner (where the mural wall is located) to maintain and safe-keep it.

“These artworks are unique, and should be touched up only by their original artist.

“We have tried to invite some of the mural painting artists to come back and touch up their artwork, but it remains a difficult mission.

“As for the physical construction next to the ‘Boy on Chair’ mural, we will liaise with the Penang Island City Council to check its status. “Normally, we will request for their enforcement if it involves an illegal construction, as they have the legal power to do so, ” she said.

When contacted, Khoo Kongsi administration staff member June See said the clearing works on the piece of land was to restore the site to its original status as a vacant land.

“We rented the plot to an individual who had sublet it to a stall selling fruits and drinks.

“I was made to understand that MBPP had given a notice to take down the illegal structure.

“The clearing work on the plot is ongoing and we hope that it can be completed as soon as possible, ” she said.

The mural is only 200m-away from another famously photographed one, ‘The Children on Bicycle’ mural in Armenian Street.

Both murals, and a few others, were painted by artist Ernest Zacharevic for George Town Festival 2012 to mark the city’s inscription as a Unesco World Heritage Site in 2008.