(The debris left behind after the demolition exercise.

Despite giving the shopowners ample time to remove the extension themselves, only one made the effort to comply when the authorities arrived.

DBKL Corporate Planning Department director Khairul Azmir Ahmad told StarMetro that one shoplot owner removed the illegal structure, which was an exhaust fan, on his own accord.

He said the rest did not act on the illegal extensions that were built over public drains, so DBKL moved in to demolish them.

“The shopowners have been issued compound notices.

“There were no untoward incidents and the demolition exercise was carried out in a peaceful and coordinated manner, ” he added.

The operation was carried out with the cooperation of officers from DBKL’s rescue squad, Mechanical and Electrical Department, Traffic Department, Licensing Department and its Bukit Bintang branch as well as Public Works and the Irrigation and Drainage Department.

Some 30 officers and contract workers were involved in the operation using five vans, one lorry and two backhoes.

According to Khairul, the illegal extensions were used as a storage unit by the restaurants.

The enforcement was conducted under the Street, Drainage and Building Act, 1974.

“Shopowners were earlier given a notice to remove the structures within 14 days, ” said Khairul, adding that the exercise was carried out for safety and hygiene purposes.

StarMetro reported last week that DBKL had given shops in Kuala Lumpur a grace period to remove the illegal extensions and structures on their premises.

Those who failed to abide by the instruction faced enforcement action.

The agencies said several shoplots, especially restaurants, had fixed grilles, built steps, installed exhaust fans and sinks illegally blocking drains and taking up a large portion of the back lanes.

Apart from Brickfields, DBKL has identified other hotspots in the city where enforcement will be carried out in stages. 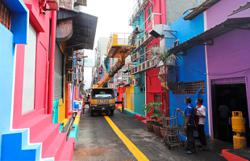