Prof Ewe (front row, fourth from left) together with other academics and staff of UTAR after receiving the mock cheques for the hospital project.

Tan said CFS was honoured to be part of the project and give back to the community.

“This is not possible without the cooperation and hard work of staff and students.

“The amount was raised through various fundraising activities carried out throughout the year by lecturers, staff and students of CFS, ” she added.

He acknowledged the effort of staff and students who demonstrated their interest and passion in supporting the project.

Thanking CFS and DSSC for their efforts in raising funds for UTAR, Prof Ewe said the project was UTAR’s continuous effort in contributing to the community’s well-being.“The self-sustaining and not-for-profit hospital will provide affordable medical services to meet the needs of the community.

“It is heartening to have a team of academics and staff who share the same goal of the university in giving back to society, ” he added.

Located within UTAR’s Kampar campus, the hospital will house 500 beds for Western medicine and 100 beds for traditional and complementary medicine.

Its first phase is scheduled to be completed by December 2021 and is expected to be fully operational in conjunction with UTAR’s 20th anniversary in 2022. 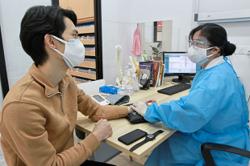