Prof Ahmad pointing out some of the raptor species that can be spotted during the migration season. — Bernama

ALOR GAJAH: The Tanjung Tuan Forest Reserve here should be conserved and preserved to allow for the successful migration of predatory birds, known as raptors, which are essential in maintaining the balance of the ecosystem.

Malaysian Nature Society (MNS) president Prof Dr Ahmad Ismail said the migration of birds of prey across the Straits of Malacca, from Sumatra in Indonesia to Tanjung Tuan in Melaka, covers a 38km distance.

It occurs only once a year between January and April, while the peak period to watch the birds crossing the straits is in March.

“Each year, tens of thousands of raptors migrate across the Straits of Malacca to return to the northern hemisphere — a journey of over 10,000km to Japan and South Korea to continue their breeding.

“The birds’ flight is aided by the winds from the west or southwest.

“As these birds have heavy bodies, they glide through the air, conserving energy across the Straits of Malacca by minimising fluttering their wings. Hence it is important that their path should remain unobstructed to facilitate the migratory process, ” he said when met at the Tanjung Tuan Recreational Forest here.

The migration of the birds is very important because raptors, which are increasingly threatened with extinction, play a major role in keeping the environment in balance as they are included in the top of the food chain as well as a benchmark for environmental quality. 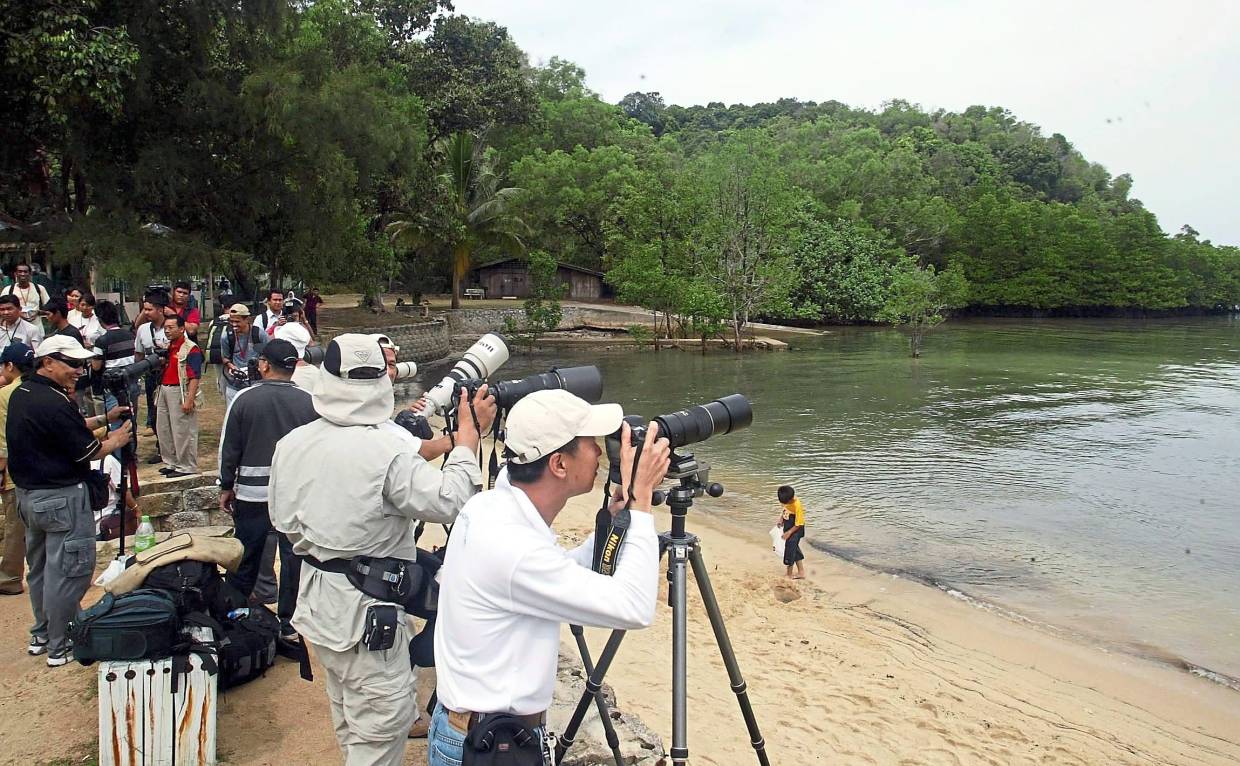 Filepic of bird enthusiasts trying to catch a snapshot of a raptor at the Raptor Watch in Tanjung Tuan, Port Dickson, during a previous event. — MNS

Tanjung Tuan, formerly known as Cape Rachado, is part of Melaka state. It is an important stopover site for migratory raptors after crossing the straits.

Some 40,000 birds have been recorded around the Tanjung Tuan Lighthouse in previous years.

Of these, 95% of the species of birds of prey were the Oriental Honey Buzzard, while other species seen included the Black Baza, Japanese Sparrowhawk, Chinese Goshawk, Brahminy Kite and Grey-faced Buzzard.

“Tanjung Tuan’s uniqueness is that it is the only coastal forest on the west coast of peninsular Malaysia gazetted as a forest reserve, wildlife reserve, a fisheries prohibited area and a historical site, ” Prof Ahmad said.

He elaborated that according to the Birdlife International website, Tanjung Tuan, which covers about 60ha, is also listed as one of the 55 Important Birds Areas (IBA) in Malaysia.

“IBA is an important biodiversity conservation site that uses birds as the key indicator to determine the level of environmental health, ” said Prof Ahmad, who is also a lecturer in Ecotoxicology and Wildlife Ecology at Universiti Putra Malaysia.

He said to raise awareness of the need to protect these birds and their habitat, MNS has since 1999 been organising “Raptor Watch” in Tanjung Tuan. This year the programme is expected to be held over two days in March.

The MNS president said the Raptor Watch programme entering its 21st season was not only for the education and entertainment of students but also for the benefit of the tourism sector as it had attracted international tourists including from Japan, South Korea, China and Singapore.

“The strategic location to observe the migration of the birds of prey across Straits of Malacca is at the Tanjung Tuan Lighthouse and PNB Ilham Resort.

“The migration of the predatory birds will provide a stunning view of the Tanjung Tuan Forest Reserve, ” said Prof Ahmad who is also a council member of the Academy of Sciences Malaysia. — Bernama