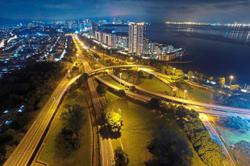 Lee preparing the batter for a pancake at her stall in Chulia Street.

Tourists and locals flock to the stall from 7pm daily to buy the delicious pancakes which cost 50sen each.

Apom seller Lee Kim Hong, in her late 60s, has been operating the stall for 30 years.

She said she had been selling the pancakes for the same price for the last 10 years.

“The pancakes were much cheaper in the past but I raised the price to 50sen each when the cost of ingredients went up.

“The size of the pancakes has remained the same all this while, ” she said.

Apom is a traditional Indian snack which consists of sugar, eggs, coconut, milk and flour.

“Previously, I helped my husband who did the cooking, ” said Lee.

“After his death seven years ago, I decided to continue the business so as not to disappoint our loyal customers.

“It’s a labour of love handling the pots daily from 7pm to 11pm.

“I’m happy when my customers are satisfied and keep coming back for more.”

Lee’s Apom Manis has been listed by food portal Penang Foodie as one of the best snacks in George Town.

“I prefer working alone although my son helps me occasionally, ” she said.

Lee, who has three children and three grandchildren, said she would continue selling the snack as long as her body could take it.

“My son has told me to take a rest. One day I will quit but not now, ” she said. Lee preparing the batter for a pancake at her stall in Chulia Street.