Fined for lighting up near food stall

Alum receiving a compound notice from an FT Kuala Lumpur health department officer for smoking too near an eatery in Bangsar. — Photos: ART CHEN/The Star

WHEN trader Alum woke up yesterday, he was craving for nasi lemak from his favourite stall in Lucky Garden, Bangsar.

He decided to stop by for a meal before heading to his designated trading spot nearby where he sold coconut water for a living.

After enjoying his meal, he stepped about two metres away from the stall and lit a cigarette.

As he enjoyed several puffs, he was shocked to find a group of officials walking up to him and be told that he had broken the no-smoking rule at eateries.

He was issued a compound for RM250 on the spot, but since it was his first offence, he only had to pay RM150 if payment was made within a month from the date the compound was issued.

DBKL Health and Environment Department deputy director Chandrakant Patel said that had Alum stood more than three metres from the stall, he would not have run afoul of the regulation. 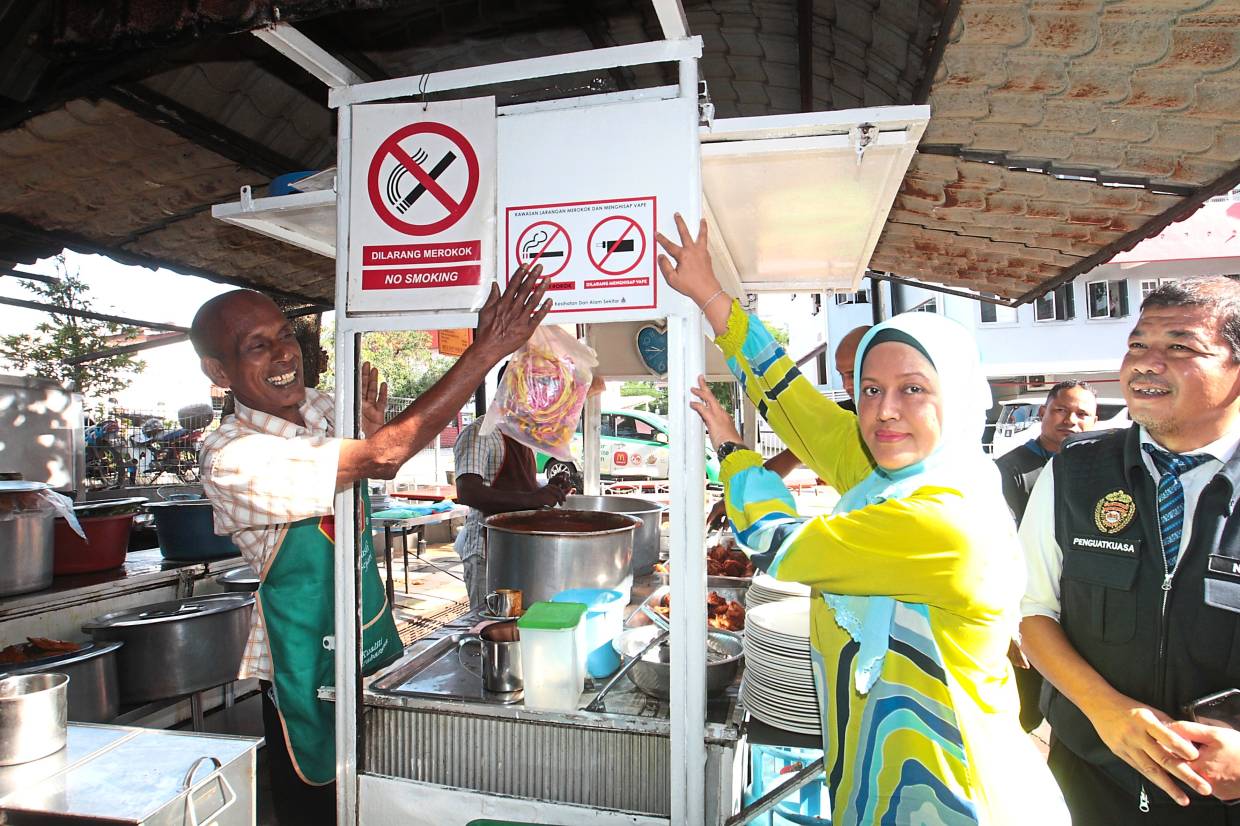 “I just wanted to have my breakfast, ’’ Alum was heard telling the enforcement officers.

“I never smoke, I just asked for a cigarette from a friend, ” he added.

“Apart from one compound, it looked like everyone was abiding by the law by displaying the no-smoking signage in their premises.

“I also noticed that there were no ashtrays around, ” she said.

She added that since Jan 1, a total of 113 compounds had been issued in Kuala Lumpur under Regulation 1 1(1)(d) of the Tobacco Control Regulation (PPKHT) Regulations 2004 (Amended) 2018 for smoking at eateries, Regulation (12)(1)(a) for not displaying no-smoking signs at the premises and Regulation 12(1)(b) for providing amenities that enabled smoking.

More than 15 enforcement and health officers from DBKL and the Federal Territory of Kuala Lumpur Health and Environment Department were involved in the smoking-ban checks.

On Jan 29 last year, seven smokers who called themselves “Smokers Rights Club” were granted leave by the High Court to initiate judicial review proceedings to challenge the smoking ban.

But the Kuala Lumpur High Court ruled on Oct 29,2019 that the ministry’s enforcement of the smoking ban did not breach Articles 5 and 8 of the Federal Constitution, pointing out that smokers could still smoke three metres away from food premises and would not be denied their right to smoke.