The recipients with the items distributed under the ‘Back to School 2020’ programme at the State Secretariat building in Shah Alam.

SEVENTY-eight children received school bags and stationery to prepare them for the new school year.

The “Back to School 2020” programme was organised by the State Secretariat’s welfare club in collaboration with SelCare Management Sdn Bhd.

The event was held as part of the club’s corporate social responsibility (CSR) programme.

The recipients were mainly the club members’ children as well as 16 Orang Asli children from Bukit Bandaraya and those from low-income families.

“We helped Orang Asli children and those from low-income families to provide the necessities for their school-going children.

“This programme is one of our annual charity programmes.

“The rising cost of living should not be the reason for us to neglect the education of these children, ” said Mohd Faizal.

He added that the children from low-income families were selected from SK Bandar Anggerik.

“We will change schools every year to help the children from low-income families, ” he said.

Zamani said the programme was one of the ways to appreciate the club members.

“This is a good initiative to support them and should be continued as education is important, ” he said.

Eight-year-old Muhammad Fyras Hisham said he was happy to receive a new school bag as he enters Year Three next year.

“I will study hard to excel in school, ” said Fyras, a student from SK Bukit Fraser.

Fyras’ father, Mohd Hisham Abdullah, 50, said he was grateful to the club’s management and hoped that the programme would be carried out annually to help the members. 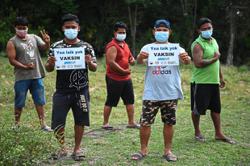