GROUND radar equipment that can detect oncoming vehicles, drones, satellites and communication lines that can identify and block hackers were brought out for public display during the Royal Intelligence Corps (KRD) exhibition at the Malaysia Agro Exposition Park in Serdang.

Adding to this was a glimpse into the successful missions carried out by the police and the military units in pre-empting terrorist attacks. On display at these booths were confiscated bomb-triggering devices and photos of vanquished criminals — one with his head blown off following a failed attack.

Visitors were also treated to a live demonstration by KRD agents who wrestled attackers attempting to kidnap a VIP to the ground. Red smoke screen and the sound of fake gunshots added a realistic feel to the scene.

“In the past, our exhibitions were held in military camps. We realised this was not an effective way to reach the public because visitors to these events were largely from the military field.

“We are aware that when it comes to national threats, the mindset is still fixated on the communist insurgency and since this has passed, the military is no longer relevant. But the incident in Lahad Datu is a reminder. We are also facing new threats in the form of cyber hackers which can jeopardise our cyberspace,” said Idura.

With awareness, Idura expressed hope that civilians could help provide information on possible threats to the military. Every civilian, she said, could play the role of informant in safeguarding national security.

The Intelligence Group Operations’ 91GOP unit who had set up a booth, offered examples of what the public could look out for, particularly those living near remote jungle areas.

They explained these were often paths used by smugglers for goods and illegal immigrants and poachers who hunt endangered animals and protected plant species.

The exhibition also offered a glimpse into the survival skills needed by military personnel when they are assigned for field missions.

One aspect was the art of camouflage which is used in operations where a reconnaissance team has to go as near as they can to enemy lines.

Sargeant Amuthan Paraman, who is psychology and war operation supervisor in the military intelligence battalion, revealed that in such tense situations, soldiers were still able to make pineapple tarts from crushed army ration biscuits and pineapple jam!

Displayed side by side with the weapons used were animal traps to hunt for food and makeshift huts of palm fronds and bamboo for shelter.

It was revealed that these missions were most often carried out to counter border threats, particularly by invaders with ideologies that are in opposition to the country’s peaceful and harmonious state.

Idura said the armed forces were so adept at on-spot construction for human shelter that their expertise were often sought by the Welfare Department to build houses for the rural poor who have lost their homes in fires. Revealing that the exhibition was organised without utilising government funds, the main sponsors of the event were Weststar, a company that specialises in the development and manufacturing of commercial and military vehicles and equipment; and System Consultancy Services (SCS) which supplies safe tactical telecommunication networks that connect battlefield users to their headquarters and mobile computer and display terminals.

On whether the event revealed too many of the agency’s secrets in their field work, she assured that what the public saw was just the tip of a gigantic iceberg.

“Most of what is being displayed here is common knowledge, like the things you see in James Bond and Johnny English movies,” she said.

Collaborating with KRD in this exhibition was Spy Gadgets, who showcased its product range of spy cameras, some so small that they can be embedded into everyday household objects like wall clocks and pens. On whether the sale of such equipment would be subjected to abuse, founder Roslan Mohd Abu, an electrical engineer who helms the five-year-old company, said there were always pros and cons when it came to technology.

“The human element is to blame. At the end of the day, it is up to us to do the right thing,” he said.

Another exhibitor Tun Security Services associate partner Hafize Adnan said the event was a good eye opener into the industry as well as a platform to inspire new talent to join the field.

“There is a worldwide need for more people in this profession, especially in the private sectors. The construction and finance industries are cases in point where quality control, tender applications, evaluation company backgrounds and data theft can affect business strategies and outcome,” he said, adding that the exhibition also made the public realise that following a target and taking photos did not qualify one as an investigator in the field of intelligence.

“This is a licensed profession, one that requires a network of expertise to analyse collected data,” he said.

In addition to the finance and industry sectors, the services of private investigators are also widely sought by secret admirers and suspecting spouses.

For visitors Sabrina Mohd Hazmin, seven, and her brothers Ali Imran, five, and Abu Khair, four, their fascination was in the weapons displayed at the military booths. Their father who accompanied them said he dressed them up in camouflage outfits just for the exhibition and reckoned the event was a good way of exposing them to the role of the armed forces.

The Territorial Army Regiment, the military reserve force of the army which is mobilised by volunteers, took the opportunity to hold a recruitment drive at the event.

A fun run, wall climbing and a motor show were held as side events to keep the public entertained. 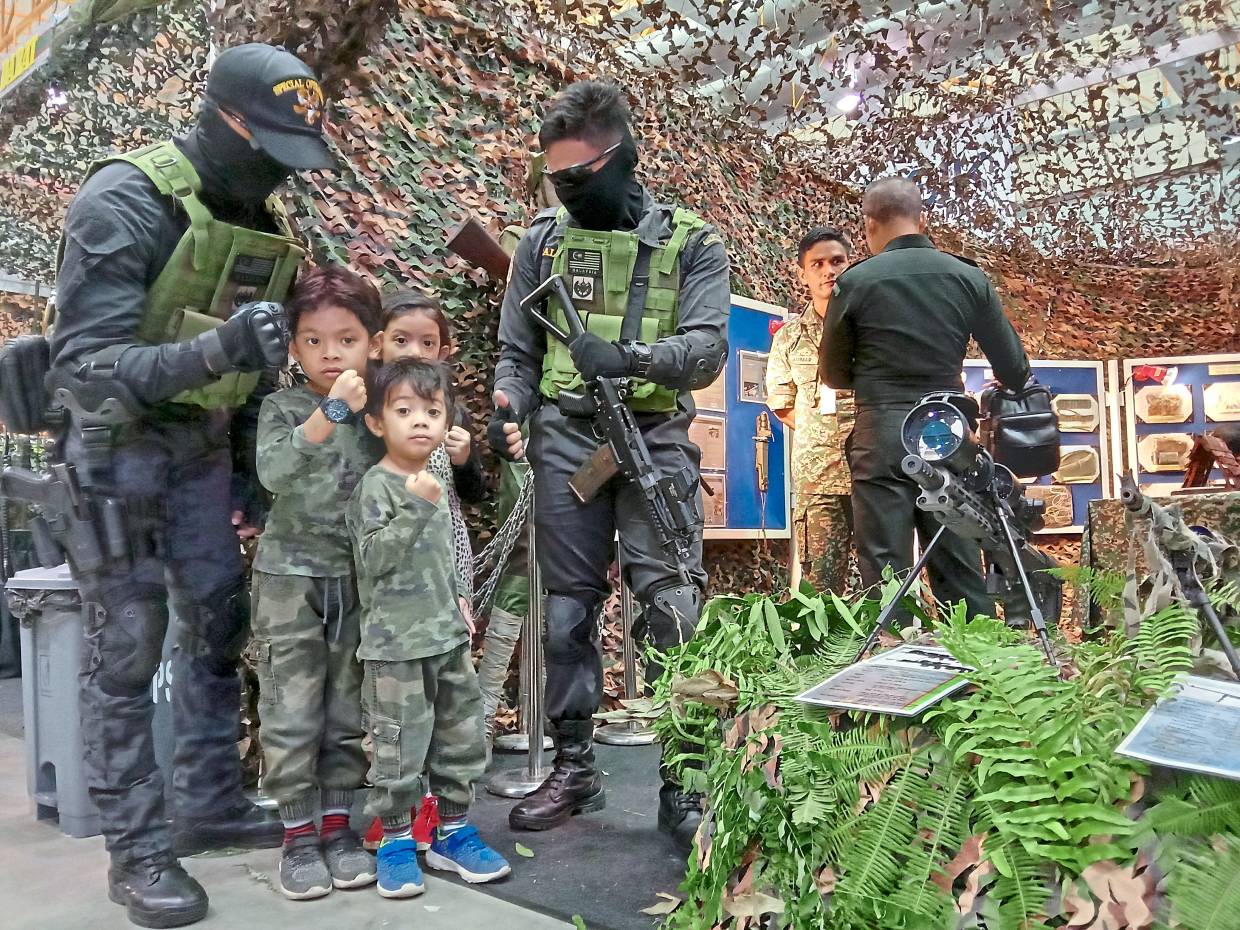 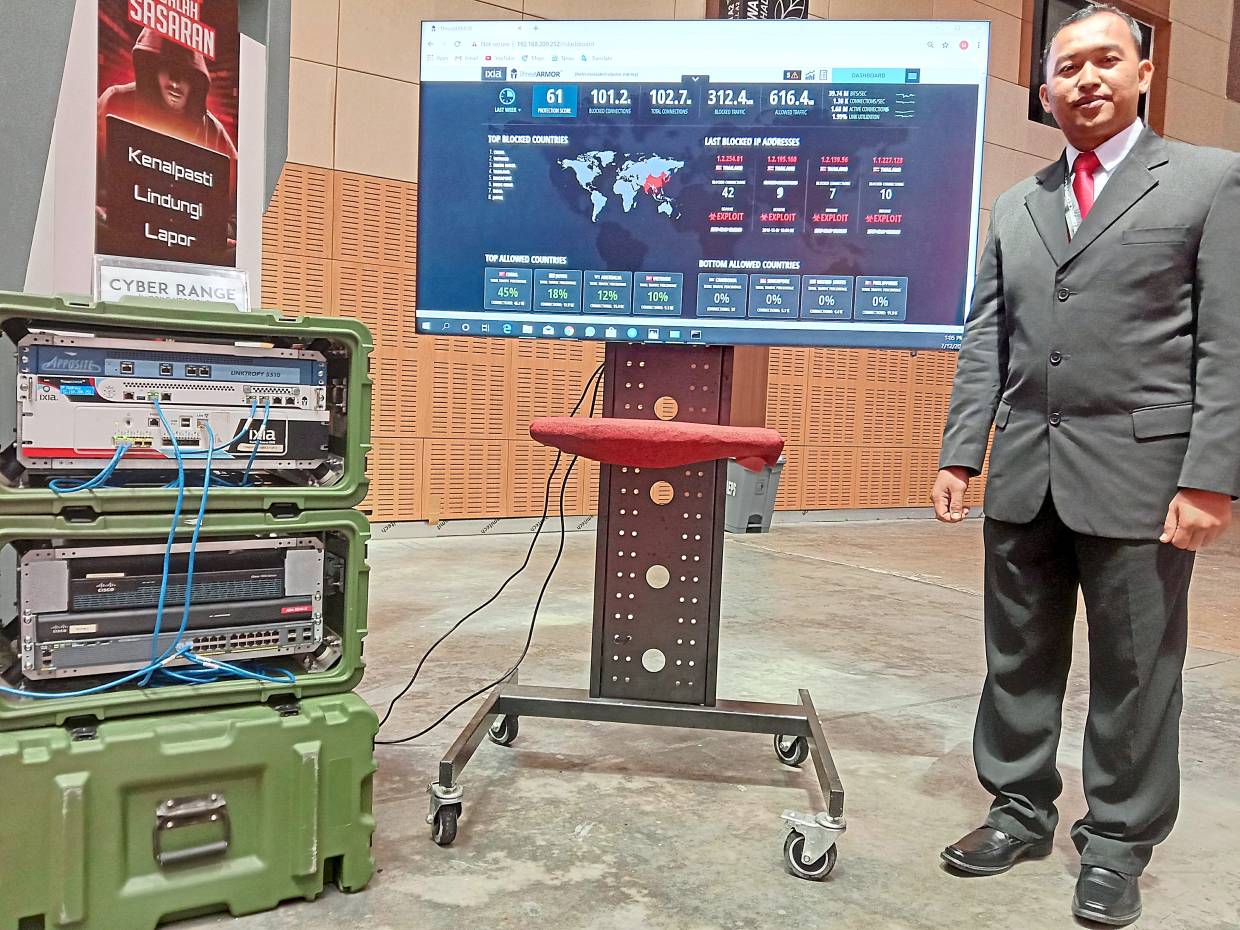 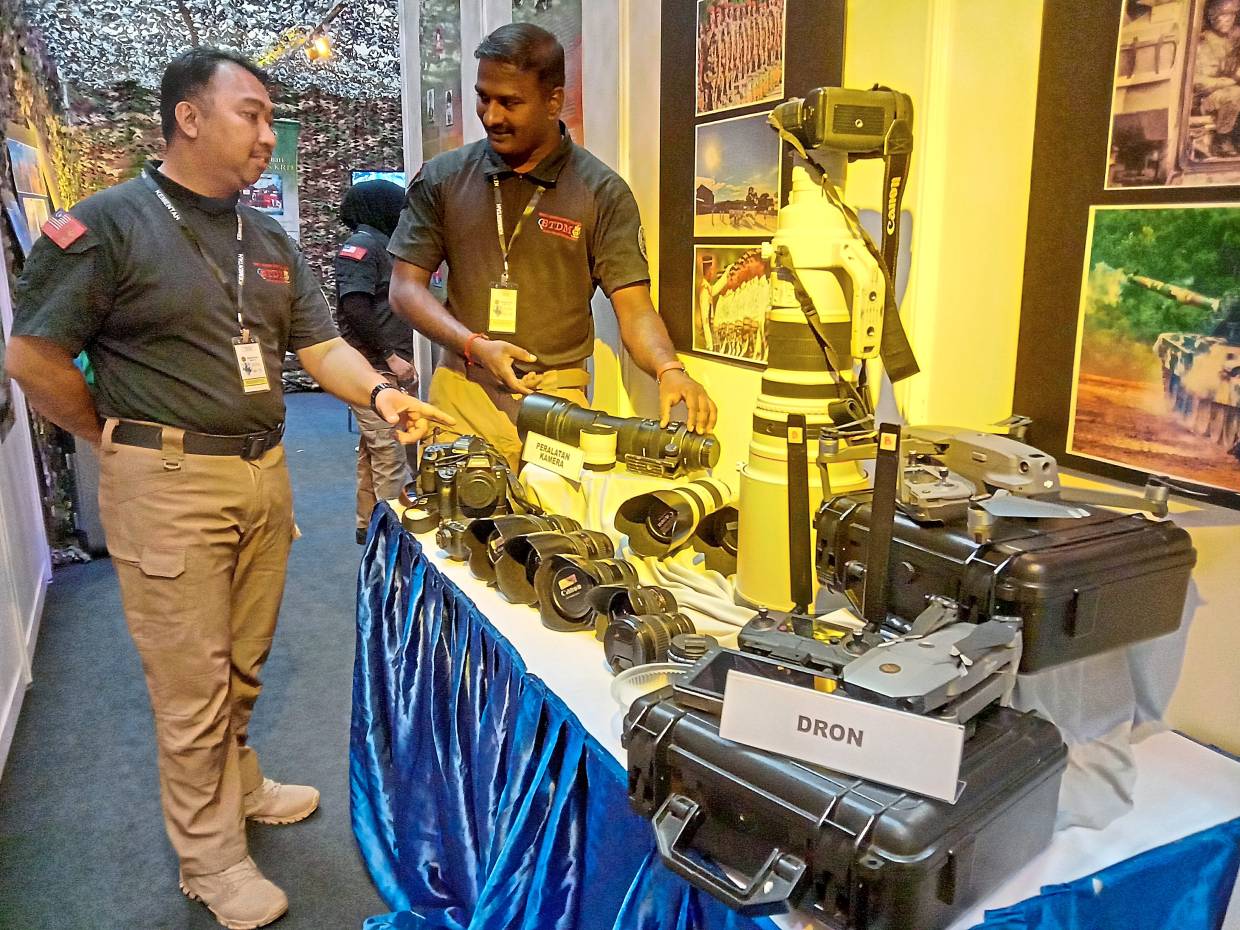 Dressed for the occasion, Sabrina, Ali Imran and Abu Khair were fascinated by weapons displayed at the military booths.

Roslan showcasing his product range of spy cameras, some so small that they can be embedded into everyday household objects like wall clocks and pens.

Hafize said the exhibition was a good eye opener into the industry as well as a platform to inspire new talent to join the field.