THERE are quite a few success stories among the neighbourhoods on board Petaling Jaya City Council’s Kebun Kita programme. StarMetro visits two of them.

Barely a month old, the Kebun Kita farm in Kampung Selamat is already a thriving space filled with assorted edible and ornamental plants.

“About two years ago, we got a grant from the then Kota Damansara assemblyman to start a small patch where we grew bananas. “We got the PJ SEED community grant last month, which we used to develop and expand the farm-cum-garden on a 3,200sq m plot that sits within Syabas reserve land, ” he said.

“We sought permission from the water agency before tilling the land, but we are aware that Syabas may want it back in future, ” he added.

Anizam said the RM11,500 grant was used to buy seedlings and equipment to set up the garden and build a storage room. A portion of the money has been set aside to buy additional supplies such as fertiliser.

Each of the 10 members, whose ages range from mid-30s to over 60, in Kampung Selamat’s Kebun Kita group adopts a section of the garden.

The produce that they grow is harvested for their own consumption or sold to their fellow villagers. There is also a community plot where the group is growing more than 70 fruit trees.

“Among the trees we planted are durian, rambutan, mangosteen, pulasan, longan, papaya, avocado and dukung, while the vegetables are cabbage, tomato, long bean, chilli, sawi and brinjal, ” said Anizam.

He said a rainwater harvesting system was installed to provide water for the plants.

The 65-year-old said KSRA received a separate grant of RM13,000 from MBPJ to start a kelulut (stingless bee) project. “The kelulut project is another community activity and it serves as a teaching tool for village folks.

“The honey is for our own consumption as well as sold to others in the village at a reasonable price. If there is still excess after that, it is sold to outsiders, ” he disclosed.

While the bees help pollinate the plants in the village, Anizam said the biggest threat to their farm are monkeys that steal or damage the crops.

Kampung Selamat is home to some 300 residents whose homes border the Kota Damansara Forest Reserve.

Anizam said Kebun Kita served as a space for neighbours and families to mingle, particularly on weekends when village folks have more time to tend to the urban farm. Some even bring food to share.

For residents of SS24, Phase 2 of Taman Megah, the Kebun Kita farm serves as a space for the close-knit community to stay active.

“When we started the garden three years ago, we wanted to use it as a place where we could educate our children about nature and encourage residents to enjoy some recreation, ” said Yong Wee On, who was the project lead before passing the role to Chop Ai Kuang.

“However, we ended up with mostly senior citizens running the garden as parents were not keen on their young children getting dirt all over themselves.

“Our elderly gardeners manage what they can. Those who are unable to do digging or lifting will do some watering and weeding.”

According to the area’s Rukun Tetangga (RT), more than 60% of residents in the neighbourhood with 227 houses are above 55 years old. Chop, who is SS24 Taman Megah Phase 2 RT chairman, said most of the items used to build the urban farm structures are leftover construction materials from renovation works.

“These include the chain-link fence around the garden, wooden support for the plants, garden shed and even water tanks to water the plants, ” said Chop, who credits Yong’s handyman skills as essential to repurposing the discarded items.

“Residents contribute kitchen waste for our compost, as well as seedlings from their own gardens. Except for the planter boxes and pots, we try to avoid buying where possible.”

The 167sq m urban farm is located at one corner of the Jalan SS24/15 playground.

It is maintained by eight to 10 active members, many of whom have gardening or farming backgrounds as they grew up in villages and small towns.

The group has installed a rainwater harvesting system to channel water from the rooftop of the nearby covered basketball court to the water tanks.

Due to farm’s small size, Yong, 70, said the members had planted fruit trees outside the Kebun Kita site as those take up more space. “We do not keep the garden locked, as we believe it belongs to the community, so they can visit anytime they want, ” he said, adding that most of the produce harvested was for personal consumption.

outsiders as well as non-participating residents stole the produce, sometimes in large quantities.

“We are planning to apply for the PJ SEED community grant to instal an automated water sprinkler system for the garden, ” said Chop, 67.

“In line with the idea of using Kebun Kita as a learning ground, we are mulling the possibility of inviting small groups of pupils from nearby SJKC Yuk Chai to explore this space, ” he added. 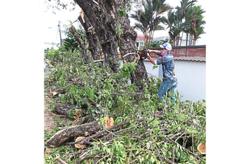 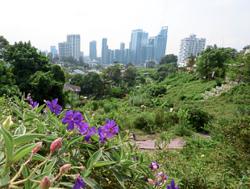