Forging ahead in field of nursing

Sister Susan cutting a cake with the nursing graduates following the graduation event.

HER interest in the medical field and wanting to contribute to society convinced Fennie Yap Pei Shan to pursue a diploma in nursing.

Her passion to excel in the chosen field saw her clinching first place for each semester of her diploma in nursing programme.

The nursing graduate of the Tun Tan Cheng Lock College of Nursing in Assunta Hospital, Petaling Jaya said the course was academically challenging and stressful.

“During theory sessions, we were assessed on our practical skills in the Objective Structured Clinical Examination.

“We were tasked to perform a clinical procedure correctly and accurately within five minutes and performed 10 different procedures for this examination every semester.

“I found this to be very challenging academically,” she explained.

Yap also said that the emotional aspect to being a nurse was tough.

“It is not easy to emotionally connect with patients, especially those who are very sick, such as end-stage cancer patients.

“This is because some slowly lose hope each day and as nurses, we cannot display our emotions in front of them. We have to encourage them.

“One of the biggest emotional challenges I experienced was when I first handled a patient dying,” she said adding that it was difficult to face and communicate with the deceased’s family members. (From left) Theresa witnessing Sister Susan (in grey) present the FMM special award to Dharsini at the graduation ceremony in Petaling Jaya.

The trials faced by diploma in nursing graduate Dharsini Muraly, who is from the 2016 class, were of a different nature.

“I had a really hard time in the course of my studies.

“I lost my father in the fifth semester. I was discouraged but my family, especially my mother and my tutors, supported me. They helped me get through the emotionally distressing period.

“Initially, I thought nursing was not the job for me but as time went by, I fell in love with it.

“I found joy when taking care of people or when they thanked me for doing my job and being able to see them recover,” said Dharsini.

She said she was keen to become a tutor at the Tun Tan Cheng Lock College of Nursing so she could help train future nurses.

“The most important thing we learn is compassion which is a value that nurses must have.

“We, as nurses make an impact every day in the lives of people in our community.

“We need to realise that we are the voice of the voiceless and advocate for those who cannot help themselves,” she said, adding that nurses should not be equated to mere servants for patients.

“We are with the patients most of the time, so we are the ones that help them heal physically and psychologically,” said Dharsini.

Both Yap and Dharsini were the high achievement award recipients in their respective classes.

Dharsini also received the Franciscan Missionaries of Mary (FMM) special award for her good academics, competency clinical and nursing skills as well as her involvement in extracurricular activities.

A total of 180 nursing students, from the classes of 2015 and 2016, received their diploma in nursing from the college of nursing at a graduation ceremony held in Hilton Petaling Jaya.

The nursing college was founded in 1961. 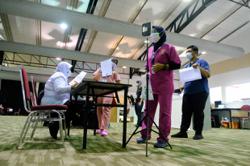