Cultivating pride with their garden

BRICK by brick, seed by seed. That was how the pupils of SJK (C) Bandar Sungai Long built their vegetable and herb patch. Only a month old, the twice weekly gardening

lessons have become a hit with the pupils.

Tan, who was elected as group spokesman by his Standard Five classmates, said everyone looked forward to gardening sessions as they could go outdoors.

“We don’t mind the hot sun and we don’t bother with hats. We just come out and enjoy the moment, ” quipped one of Tan’s classmates.

The pupils said they have derived a sense of pride in seeing their herbs and vegetables grow and more importantly, the lessons were going to help them save money in the long run. They reasoned that while it would be more convenient to buy vegetables from a supermarket, growing their own means knowing exactly what goes into the nurturing process.

“What’s important is they are organic. We don’t use pesticides, ” Tan said proudly.

Though they have yet to enjoy the harvest of Chinese kale, Brazillian spinach, kangkung, mint, coriander and pandan leaves from the school’s garden, the lessons have inspired the pupils to start their own edible gardens at home. 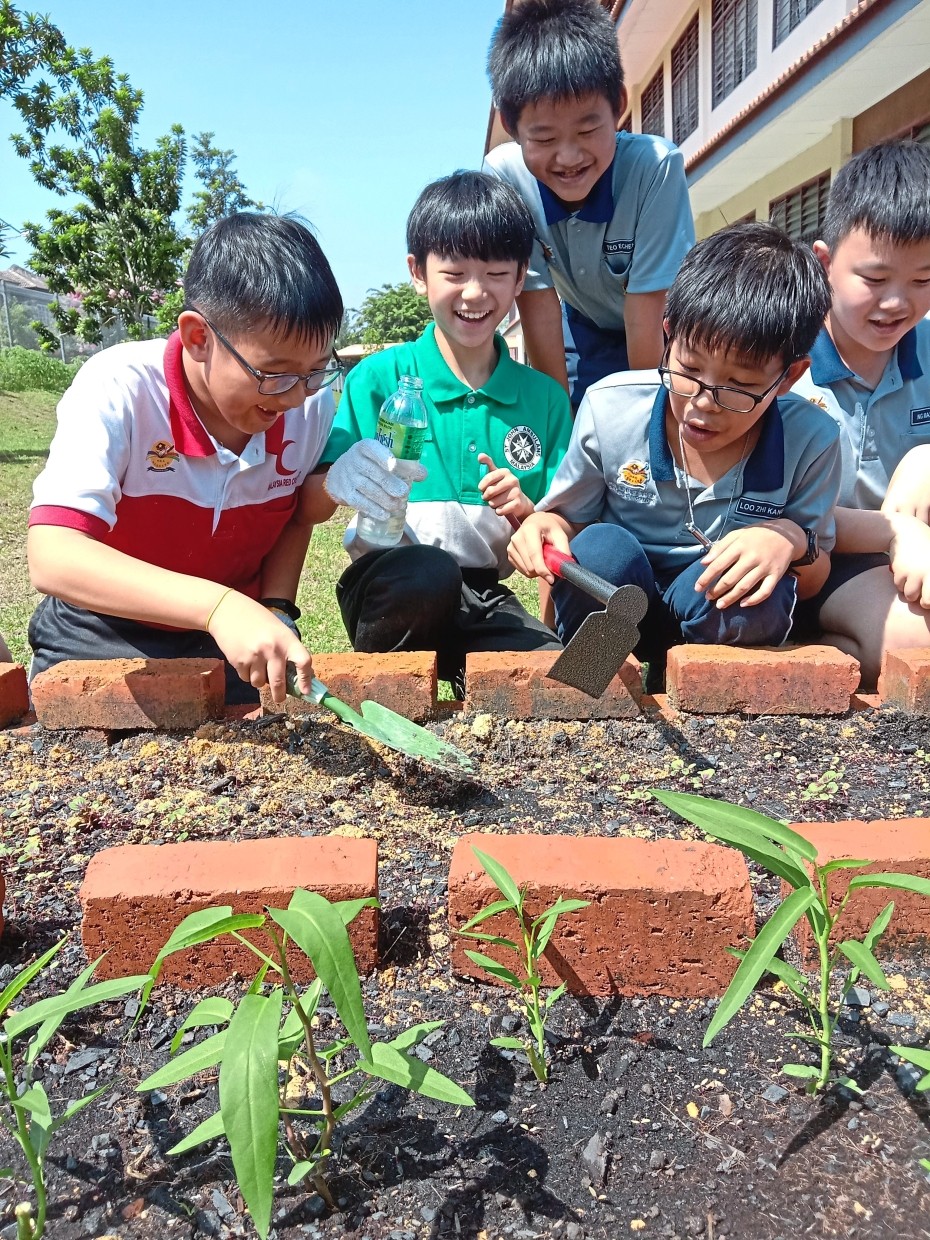 Tan (in green T-shirt) and his friends say they are now planting chillies and papayas at home, inspired by the gardening lessons at the school’s newly built vegetable and herb patch.

“We are planting papayas, pineapple, pandan and chillies. One student is growing sweet potatoes with his mother’s help, ” said Tan.

The edible garden jointly benefits the design and technology syllabus and student guidance and counselling department.

New counselor Mok Lee Tim, who has taken over from Ong, said teachers reported a change in behaviour for pupils who had taken part in the gardening programme.

“They were more responsible, confident and patient, ” said Mok.

Located behind the school canteen, the project is parked under the Selangor environment and green technology grant (Geran Kecil Alam Sekitar dan Teknologi Hijau Selangor) which benefited 52 recipients with a total of RM244,357 in 2018.

A RM5,000 grant was awarded to the school and managed by the Parent-Teacher Association (PTA).

School principal Tay Yuh Tzong said all requisition forms for fertiliser and seedlings would be submitted to the PTA for approval.

On future plans for the gardening project, PTA president Lee Kok Hoon said in jest that it would be great if the pupils could start cultivating Musang King and Black Thorn durians but realistically, the lengthy growing period may not motivate them as well as faster growing plants like chillies, cucumber and ginger, which the teachers are planning to introduce in the next round.

On a serious note, there is onus to get more pupils involved, said the school’s

Currently, of the 2,034 pupils in the school, only 44 are taking part in the programme.

Selangor environment, green technology and consumer committee chairman Hee Loy Sian, who was there to present appreciation awards to supporters of the edible garden programme, said he hoped more schools would open their grounds for the same purpose and teach the younger generation to value their environment.

“If the programme is well-received, this may become a solution to addressing vegetable shortages within the state, ” he said.