Tiong blowing out the candles on his birthday cake while his wife and son look on.

SIBU: All that business tycoon Tan Sri Tiong Su Kuok wanted for his birthday was for his grandchildren not to take for granted the good life they have now.

Tiong, who is the chief executive officer of SK Tiong Group of Companies, in speaking at his 77th birthday bash, instead wanted them to “work hard and be humble”.

Some 1,000 guests comprising relatives, friends and business associates attended the dinner where he presented to his Bridge of Love Education Help Fund 2019 RM89,400.

Tiong started from humble beginnings working as a fishmonger with only RM3.40 in his pocket six decades ago.

After saving up money, he went into seafood business, which grew by leaps and bounds. and he is now the president of SK Tiong Group of Companies, chairman of CCK Consolidated Holdings Bhd and executive chairman of Nam Cheong Ltd.

Through hard work and perseverance, he managed to diversify into fish and prawn cold storage, processing of aquatic products, organic tiger prawn farming, aquaculture, poultry processing, shipbuilding and ship leasing, property development as well as distributorship of food and beverages.

His retail chain and its CCK Fresh Mart flagship, specialising in selling aqua-products and frozen foods, can not only be found here, in Kuching and Miri, but also Sabah and peninsular Malaysia, as well as Jakarta and Pontianak in Indonesia.

With success in this area, Tiong then ventured into shipbuilding by establishing Nam Cheong to enter the international shipbuilding arena. He partnered with China shipbuilders to construct offshore support vessels.

“What you have now might be temporary only. Thus you need to work hard and not take things for granted,” he said to his family.

Tiong also advised them to appreciate people who had helped them in various ways.

“Do not remain where you are now but continue to upgrade yourself in this ever evolving world,” he added.

On his businesses, Tiong attributed the success to teamwork among their multiracial staff.

“Everybody in the company has his or her responsibility. We need to continue to trust each other and build strong relationships so the company can scale to greater heights,” he said. — By ANDY CHUA 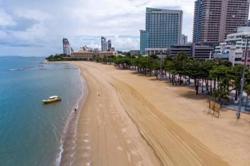