Better to be safe than sorry

Filepic of the PJS 9 Community Night event last year. This year’s gathering scheduled for tomorrow has been postponed because of the worsening air quality.

With the haze situation not letting up in most parts of the country over the last few days, most organisers of outdoor programmes such as runs, community gatherings and gotong-royong have postponed their events while others have decided to call off their activities for safety sake.

Apart from the extra costs that organisers have to bear for the postponement, it is a setback for those who spent months preparing for the events as this means they will have to arrange the planning and logistics all over again.

Members of the public though have no qualms about this unavoidable postponement as the health of the participants especially senior folk and young children are at stake if the events went ahead.

Some organisers on the other hand are keeping their fingers crossed and hoping for the Air Pollutant Index (API), which was over 150 in some parts of the Klang Valley on Thursday evening, to eventually subside and allow them to proceed with the planned outdoor events.

As a result of the worsening haze, the Taman Tugu Eco Day scheduled for today at Taman Tugu Nursery has been postponed to Oct 19, as announced on its Facebook page.

Eco Day is an annual event to spread awareness regarding conservation and preservation of public green spaces. The Tropical Rush 5K event scheduled for today at Setiawangsa has been cancelled.

He said the new date for the events would be announced on the council’s official social media later.

The PJS 9 Community Night scheduled for tomorrow at 8pm, at the PJS 9/14 field has also been postponed.

PJS 9 Rukun Tetangga deputy chairman Mohd Noor Ahmad, who is also the organiser, said he had no choice but to postpone the annual community gathering.

“It is unfortunate as all arrangements have been made, the banners have been printed. Thankfully, as we are postponing and not cancelling, we do not lose the deposit for the caterer and tents, ” he said.

Meanwhile, Perodua has postponed the MYPerodua Nation carnival scheduled for Sept 20 to 22 at Setia City Oval Lawn in Setia Alam. Taman Tugu Eco Day, originally scheduled for today, is now postponed to October because of the haze.

He said the SS19/1 Mid-Autumn Festival celebration that was planned for last Friday evening was cancelled due to the haze getting worse.

The Cyberjaya Half Marathon 2019 and Tropical Rush 5K, both scheduled for tomorrow, have been cancelled.

The Tourism Games 2019 scheduled to take place at the end of this month has been postponed as well.

Other events that have been postponed are the Atria Makan Fun Run 3.0 which was supposed to be held last Sunday.

Atria retail management director Lee Beng Beng said the current air quality was not conducive for them to proceed with the run.

“Due to the rescheduling of this event, we had to bear cancellation costs of approximately RM20,000, ” he said, adding that they were currently working on the permit application for a new date and will announce it once getting approval from the authorities.

“The Makan Festival, however, went on as scheduled. Most of the participants were very understanding of the postponement for the fun run.

“We are grateful to receive the support and understanding from all our partners, sponsors as well as participants on the rescheduling of the run, ” he said. 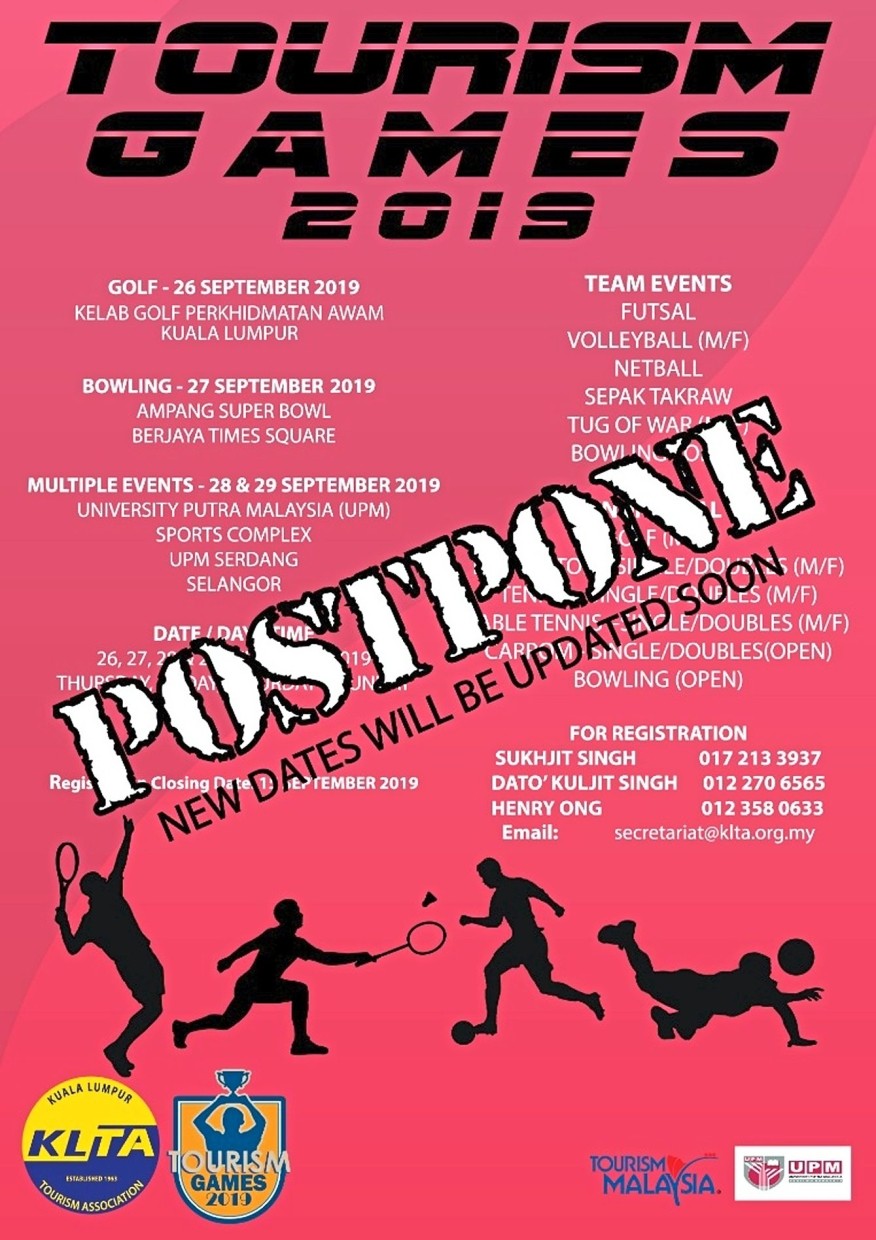 The Tourism Games are among outdoor events that have been postponed.

Over 1,300 runners representing more than 60 corporations have registered for the event.

According to a Bursa Malaysia spokesperson, the decision to postpone the Bursa Bull Charge was due to the severity of the haze.

“We understand that this decision would have caused some inconvenience to some of the runners. However, this was a decision that we had to make in the interest of the safety and health of those involved in our annual charity run.

“Nevertheless, the decision to defer as opposed to a cancellation was made to minimise the losses and wastage of resources.” he said, adding that additional arrangements are being made due to the change in date of the event.

“We do not expect to incur any significant expenses or losses as a result of the postponement as it is within the planned contingency expenses that we have already budgeted for, ” said the spokesperson.Also postponed were the BHPetrol Orange Run 2019 on Sept 15.

In a press statement, the organiser stated: “In view of the current haze situation, BHPetrol is postponing the event to protect people from exposure to harmful levels of haze. A new date for the event will be announced in due course.”

The ceremony to place wreaths at the War Memorial Monument in Shah Alam in conjunction with the state-level Warriors Day celebration has been postponed. It was scheduled to take place on Sept 19.

Show goes on for some

However, not all outdoor events are cancelled or postponed.

Some organisers are going ahead with their events in hopes that the haze situation will improve soon.

The Ampang Jaya Night Run 2019 by Ampang Jaya Municipal Council scheduled for next Saturday, between 8pm and midnight at Jalan Bandar 12, Taman Melawati, will proceed.

In a press statement, MPAJ said, “This is because all preparations have been made, including food and drinks for the participants. We hope the API will drop by then. Any updates or announcements will be made on race day.”

The Mid-Autumn Festival celebrations will take place at the Central Market Outdoor Stage, from 5pm until 10pm today.

“If needed, some of the events can be relocated indoors, except for the fire-eating performance, ” she said.