From fallen logs to art pieces

A motorist passing by (from left) the Jigsaw Puzzle, Wau and Paper Plane wooden sculptures at the pocket park. The park costing RM23, 000 was launched on Aug 3 with funding from six councillors.

VISITORS will have a nostalgic walk through the themed pocket park at the Jalan Perak-Jalan Free School junction where five art sculptures depicting old-school games stand.

The wooden sculptures – Gasing (Top), Lastik (Catapult), Jigsaw Puzzle, Paper Plane and Wau (Moon-kite) – were carved using the logs of angsana and rain trees which fell during a huge storm in Penang in November 2017.

Artist manager Tan Chor Whye said the sculptures were carved based on the five games that used to be played by children back in the 1960s and 1970s.

“In those days, there were no digital games, mobile phones or computers.

“Children occupied themselves by playing these simple but fun games.

“ I remember having a lot of fun playing with other children in my neighbourhood. 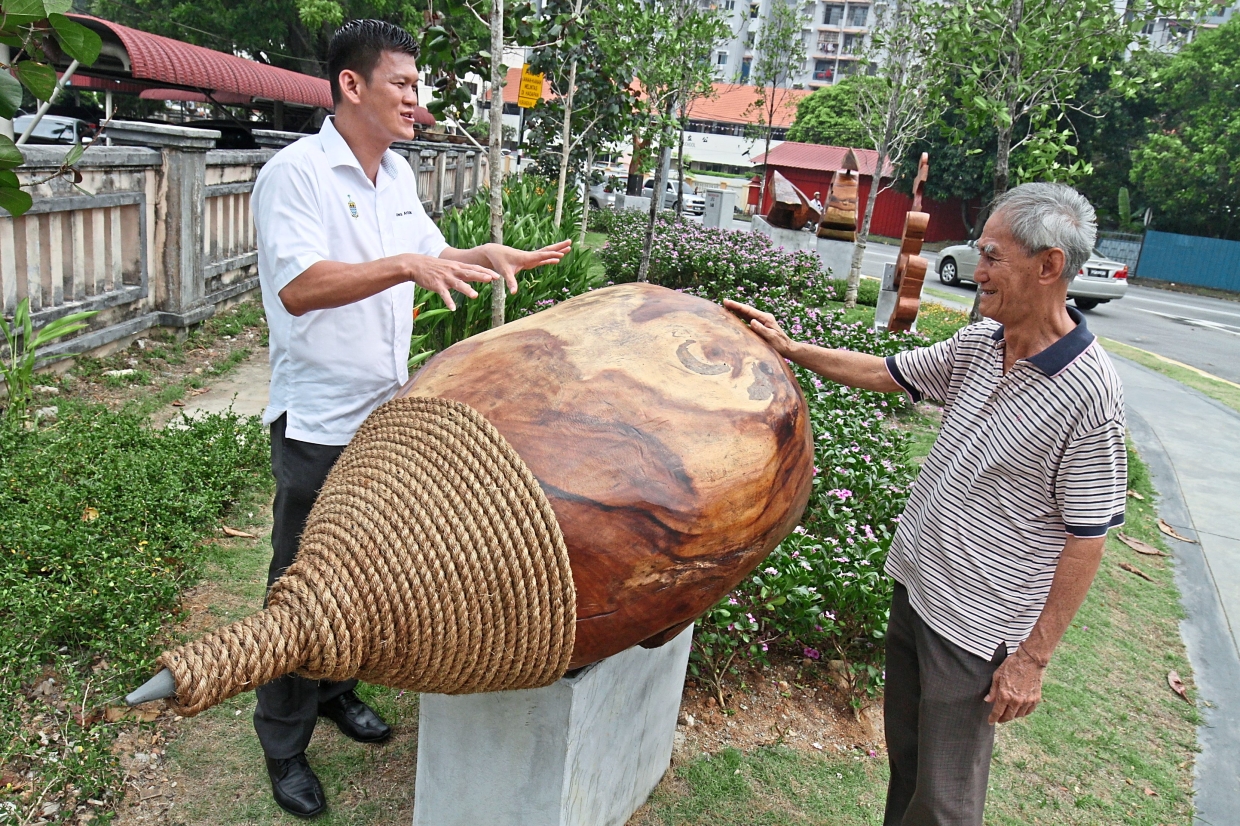 Ong (left) briefing a passer-by at the pocket park on the Gasing wooden sculpture carved out from the logs of fallen angsana and rain trees. — Photos: CHAN BOON KAI/The Star

“Now you don’t see children indulging in these old-school games anymore as they are mostly glued to screens and prefer digital games.

“You also seldom see children hanging out with the other kids in the neighbourhood nowadays as most people live in high-rise buildings, ” he said.

Tan said the sculptures were placed at the park to bring back sweet long-forgotten childhood memories.

“We hope to reconnect with the local community.

“The scupltures will prompt them to share stories of their childhood, ” he added.

Batu Lanchang assemblyman Ong Ah Teong said the public art installed at the park was an initiative by Penang Island City Council (MBPP) and the Can Can Public Art Team.

“We engaged a team of artists to sculpt the logs into art pieces as this would be more meaningful, ’ said Ong.

“This project will also create awareness of our heritage among the communities here and attract the attention of the young as many people pass by this park each day.

“Soon, we will be turning more public spaces into pocket parks as well, ” he added.

Ong said the spaces which would be turned into pocket parks were the sites in front of SMK Convent Green Lane, in front of Lam Wah Ee Hospital and near the Batu Lanchang market.