Leaving a legacy of love and kindness 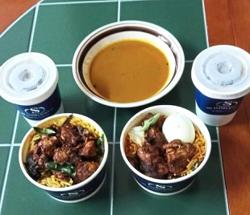 The crowd getting ready to follow the hearse of Puvaneswary at Taman Riang in Butterworth. — Photos: ZHAFARAN NASIB/The Star

K. PUVANESWARY, the wife of the Sri Ananda Bahwan founder, is remembered as a kind-hearted, calm and hardworking person.

Head chef of Sri Ananda Bahwan Restaurants, Karunanithi Partipan, remembers how calm and comforting she was.

“If she was angry with anyone, she never showed it but would keep quiet instead.

“From that, we would know that she was not happy with something, ” said Karunanithi.

At Puvaneswary’s funeral, there was a sombre mood among the 1, 000-strong crowd. Harikrishnan (with bandaged hands) and Veerasamy (left) performing the final rites at the funeral of Puvaneswary at their house in Taman Riang in Butterworth.

The wife of V. Harikrishnan, 51, the founder of the Sri Ananda Bahwan chain of restaurants, died in a road accident last Thursday.

The crowd came to pay their last respects at the family home in Taman Riang, Butterworth, on Saturday.

The cortege left the house at around 11.30am after the last rites and Puvaneswary, 47, was cremated at the Hindu cemetery at Jalan Siram.

Her son, Veerasamy, 21, said his mother worked at a private company before she was wedded to his father.

After her marriage, she focused on the family business and personally oversaw operations of the Sri Ananda Sakthi Silk House outlets.

“She worked very hard with my father, uncle, aunty and relatives.

“She sacrificed all her time on the business. She was an asset to the company and we are going to miss her forever.

“She ran the office. We do not know how are we going to manage without her, ” said Veerasamy. Shop assistant R. Selvam, 66, from Pudukkottai, south India, said Puvaneswary, fondly known as Manju, was a kind-hearted person who gave away clothing to the underprivileged every Deepavali and presented stationery to poor pupils.

He said she employed him in 2003 to work in her textile shop.

“I can’t take it that she has died and feel so sorry as I never expected such a tragedy to happen to her, ” he said.

Selvam said that the day before the accident, she left for Ipoh to check on the family businesses there.

“She gave me RM150 and told me to look after the shop properly in her absence.

“I never thought that would be the last time I would see her, ” said Selvam in between sobs.

Waiter Kartigai Raj, 38, from Aruppukkottai, south India, worked under Puvaneswary for 16 years and described her as a great lady who was concerned for her workers.

“She never treated me as a waiter but as a brother. I miss her so much as she was always concerned about our welfare.” he said.

Deputy Chief Minister II Dr P. Ramasamy, who was at the funeral, extended his condolences to Harikrishnan on the loss of his wife.

“The family has done a lot of social responsibility programmes that helped Penangites and we feel their loss, ” he said.

In the tragedy at around 3am last Thursday, the family were on their way back to Penang from Ipoh when their car skidded off the road at KM200.9 on the North-South Expressway.

Puvaneswary died on the spot while Harikrishnan sustained injuries to his face and broke his right finger.

Their other sons Mehgulan and Navinsamy sustained injuries to their knees and hands.