Rats! Who ate the cucumber?

A health officer checking some of the food items at the mini market.

A MINI market was ordered to close for two weeks after rat droppings were found in several areas of the premises in Kepala Batas on the Penang mainland.

The mini market, which also sells wholesale products, was inspected during a joint operation by the state Health Department and Seberang Prai Municipal Council on Thursday.

He said a cucumber, which was believed to have been partially eaten by rats, was also taken for further examination.

“We are worried about leptospirosis although we have not heard about it here. However, it could be a problem if one rat is tested positive with the virus. 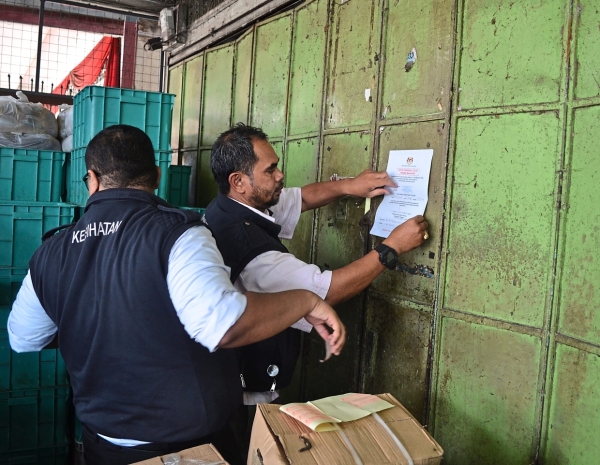 Officers pasting the notice of temporary closure at the mini market in Kepala Batas.

“The rat droppings that we spotted were found to be wet,” Mohd Wazir told reporters after issuing a notice for the premises to be closed down and to carry out thorough cleaning.

He also said the same premises was examined last year.

“We took chilli samples and found that they did not comply with the Food Act 1983 and Food Regulations 1985 relating to pesticide residue.

“The mini market also acts as a wholesaler for its surrounding area, including for restaurants as the premises also sells vegetables,” added Mohd Wazir.

He said the mini market was among 29 premises which were examined in all three districts on the Penang mainland, adding that 19 notices were issued for various offences. Mohd Wazir showing the cucumber that is believed to have been partially eaten by rats at the mini market.

“The offences were related to imported food, the selling of expired goods, dented goods, and goods with damaged packaging, among others.

“The name and address of the packer and importer, including the name of the country from which the food originates from, must also be stated on the label.

“The compounds issued for the offences amounted to RM54,500,” he said.

“Of the 32, 10 premises were ordered to close for two weeks.

“A total 44 notices were also issued for various offences, with total compounds issued amounting to RM11,900,” he said, adding that the raid was part of the Ops Tomyam operation.