DBKL Corporate Planning Department director Norhaslinda Nordin said the operations were conducted according to the standard operating procedure (SOP) and were above board.

“This was not the first time we carried out enforcement in the city. Operasi Tegas has been ongoing for several years now,” she said.

Norhaslinda was responding to allegations by Kuala Lumpur Hawkers and Petty Traders Association that DBKL officers acted roughly against Jalan Petaling traders during one of its recent operations.

“It’s a never-ending problem we face and the perpetrators are oftentimes the same people,” she said. 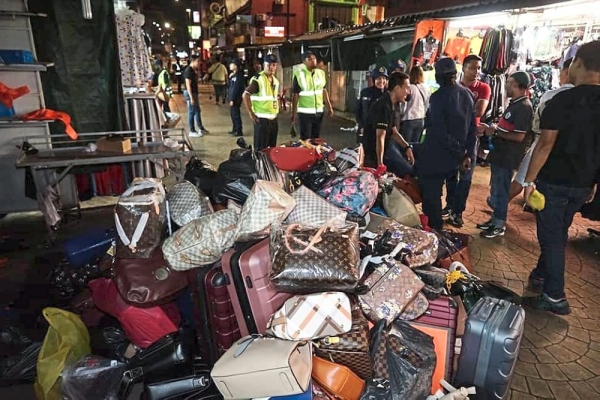 Enforcement officers watching over some of the seized imitation goods in Jalan Petaling, Kuala Lumpur. — Photo courtesy of DBKL

Norhaslinda added that the operations were always carried out with personnel from various government agencies, including the police, Immigration Department, Customs Department and the Domestic Trade and Consumer Affairs Ministry.

“Based on previous experience, we don’t go charging full-swing into an operation or everyone will just run helter-skelter.

“The usual SOP involves plainclothes officers observing the situation in the area. Because it is a public place, everyone’s safety is our priority.”

A trader who declined to be named told StarMetro that he did not see any officer making a record of the confiscated goods, adding that the traders were also confused by some officers wearing vests marked “Flying Squad” and wondered if the team was from DBKL.

Norhaslinda expressed surprise that the traders were unaware who the “Flying Squad” officers were.

“We deploy flying squad teams nearest to the operation area when we need backup. These are the first teams to arrive in any disaster or flood situation.”

Meanwhile, Bukit Bintang MP Fong Kui Lun said the association did not intend to hinder DBKL from doing its job but suggested that enforcement teams follow the SOP.

Likewise, he said hawkers and traders must also adhere to the terms and conditions underlined by DBKL.

“I will discuss the matter with the relevant parties and the mayor to ensure that the hawkers follow the terms that have been set,” Fong added.