UTM staff at the Hari Raya Aidilfitri celebrations using their own containers for the food at the buffet.

JOHOR BARU: As awareness on the problems caused by single-use plastics grows, more states, organisations and institutions are taking steps to do away with them altogether, especially when it comes to packing food and beverages.

The latest to take a stand on the issue is Universiti Teknologi Malaysia, which announced a bold move to minimise the usage of plastics among students and staff by encouraging them to bring their own reusable containers to campus.

Its vice-chancellor Prof Datuk Dr Wahid Omar said the university would be making it mandatory for students and staff to bring their own food containers and cutlery when eating within the campus.

“No single-use plastic objects will be allowed in any of our university’s official activities as we want to reduce plastic waste and create an environment-friendly campus.

“We even want to stop our university’s cafes from providing any plastic cutlery, plates and plastic bags for students to take away food,” he added.

Dr Wahid said this during a press conference after the university’s Hari Raya celebration held at its Skudai campus here.

He pointed out that UTM has been taking many steps in the past six years to build an eco-friendly environment within the campus.

“From my own experience of recycling, I realised that the volume of wastage actually thrown only amounted to about 10% of the original volume of trash without recycling.

“That means we are able to save 90% of wastage that could cause harm to our earth or result in its destruction,” he said.

Dr Wahid said the steps taken by the university included a ‘Car-Free Day’ event held every third Thursday of the month in an effort to reduce carbon gas emissions.

He hopes that all of their efforts to educate the public, their students and also themselves on the importance of taking care of the environment will have a positive impact.

“I believe as we make it a habit, it will become easier for us with the realisation of the need to help save our environment.

“We need to be selfless and sacrifice a little each day so that we can ensure the well-being of our environment for the generations to come,” he said.

UTM’s ban on single-use plastics on campus is in line with Malaysia’s Roadmap Towards Zero Single-use Plastics 2018-2030, which was mooted by the Energy, Science, Technology, Environment and Climate Change Ministry (MESTECC) in October 2018.

According to the ministry, environmental problems related to plastic waste have become a major problem in Malaysia which has been ranked as 8th among the top 10 countries with mismanaged plastic waste in the world.

A study estimated that Malaysia produced 0.94 million tons of mismanaged plastic wastes, of which 0.14 to 0.37 million tons might have been washed into the oceans.

There have also been many studies highlighting the potential health effects of single-use plastics on humans and animals, besides the economic impact.

According to MESTECC, the Asia-Pacific Economic Cooperation (APEC) had estimated that marine plastic pollution in the region could ost US$13bil (RM53.9bil).

As of this year, more than 60 countries have introduced some measures to curb single-use plastics waste.

In Malaysia, several states and local councils are slowly phasing out single-use plastics, starting with straws.

Selangor has announced a state-wide ban on single-use plastics at all departments and agencies under the state’s administration from July 1.

The state has also moved to ban plastic straws in all eateries beginning July 1, while Penang announced a ban of plastic bags every Monday, also from July 1, even for shoppers willing to pay 20sen per bag.

Penang had imposed a statewide ban on plastic bags 10 years ago – initially for one day, then increased to three, and then daily, for some businesses.

Johor had in 2018, ordered all supermarkets and hypermarkets to replace their plastic bags and polystyrene containers with biodegradable one.

However, the state has yet to announce any new guidelines to curb single-use plastics. 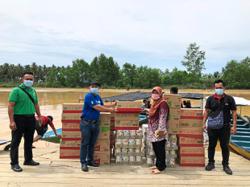