Mega project may be reviewed

THE Penang government may review the scale of the Penang South Reclamation (PSR) scheme if there is federal funding for its Penang Transport Master Plan (PTMP).

Chief Minister Chow Kon Yew said the size of the PSR near Teluk Kumbar could be scaled down if the Federal Government was willing to fund certain components of the PTMP.

“We can relook at the scale of the PSR project if we have the funding from the government. The size of the land to be reclaimed can be relooked, but the PSR scheme is still needed.

“We need PSR not only to finance the PTMP, but also to drive the state’s economic development in the future.

“The reclamation of the three islands will be the engine of growth for the future,” he said, adding that he welcomed the statement by Finance Minister Lim Guan Eng during a press conference at Komtar on Monday.

It was earlier reported that the government had not ruled out the possibility of funding the PTMP, provided an official application is made by the state government.

Lim was quoted as saying that there were numerous aspects which needed to be discussed, including the financial architecture of the mega project, before a decision on the matter could be made.

The PSR is a massive plan to reclaim the islands totalling 1,800ha, which is about the size of 3,600 football fields.

The success of the PTMP, which is the state government’s multi- billion ringgit public transport project, depends on funding from property development on the three man-made islands - Island A (930ha), Island B (445ha) and Island C (323ha).

Island A is seen as a conti­n­­­uation and expansion of the Bayan Lepas Free Industrial Zone (FIZ) while Island B will be “a playground for city planners and architects to give their best design” with a tram system and green spaces.

Island C is meant for a mixed development project.

Chow said it was important that Penang continues to grow its economy, especially in the electrical and electronics (E&E) sector which will be carried out on Island A.

Chow said the state was still awaiting approval for PSR before making an official application for funding from the federal government.

“We will apply for funding once the approval is given, in particular the Light Rail Transit. This component in Klang Valley was funded by the Federal Government.

“We understand that the funding might come in stages. We are looking at a disbursement of a few billion ringgit over a period of seven to eight years, until the completion of the project,” he said.

Chow also welcomed Economic Affairs Minister Datuk Seri Mohamed Azmin Ali’s statement that both the state and Federal Government should work closely to take care of the needs of the Penang people. 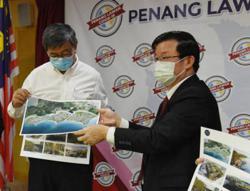 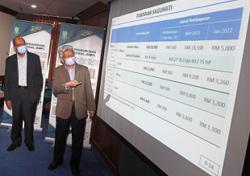